This article is my review of the Qatar Airways A380 First Class seat and service.

For those of you who missed my earlier articles in this series, this is what I covered:

At the time I booked, Qatar Airways was not releasing Avios seats on the A380 in First Class to London.  There was plenty of availability to Paris, however, so I booked myself onto the early morning Doha to Paris service.  I booked a separate connecting flight to London using a Reward Flight Saver British Airways redemption.

I didn’t realise at the time that this would involve a change of terminals in Paris …. 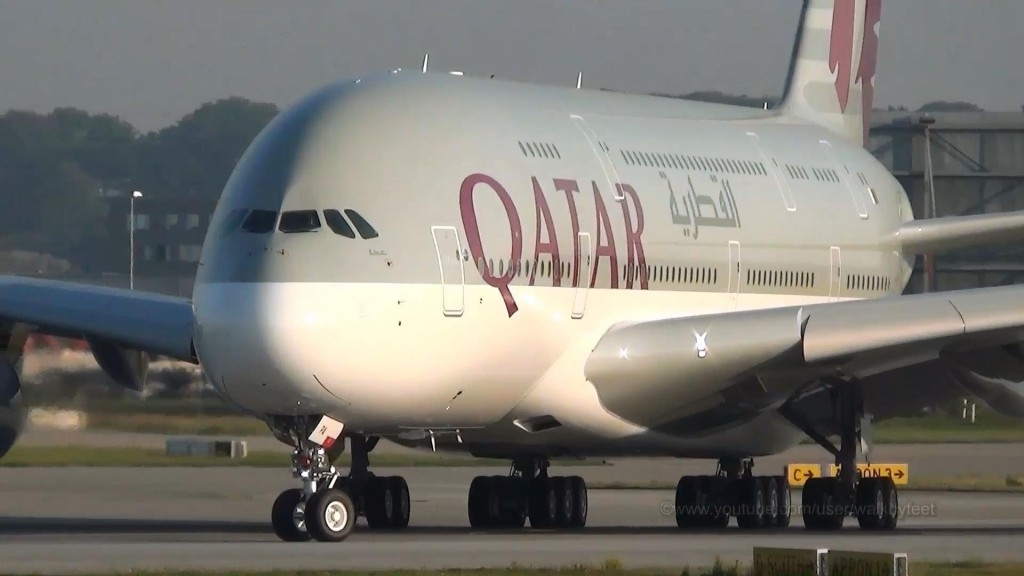 It is not clear how committed Qatar is to First Class.  The Boeing 787 and Airbus A350 fleets on order do not come with a First Class cabin.  The airline was clear that it felt it had an exceptionally good business class product – something most HFP readers who have tried it would agree – and did not need First Class.

However, the 10 A380 aircraft – of which six are in service – do come with First Class.  The key things to note are:

it is a very small cabin with just eight seats

First Class is at the front of the upper deck.  Business Class sits directly behind.  I will be testing out the Qatar Airways A380 Business Class seat in March and will be reviewing it on HFP.

Interestingly, there is also a block of Economy seats at the back of the upper deck.  I’m not sure how they stop customers from those seats accessing the bar, of which more later.

I was in 2F which was the right-hand middle seat in the second (final) row: 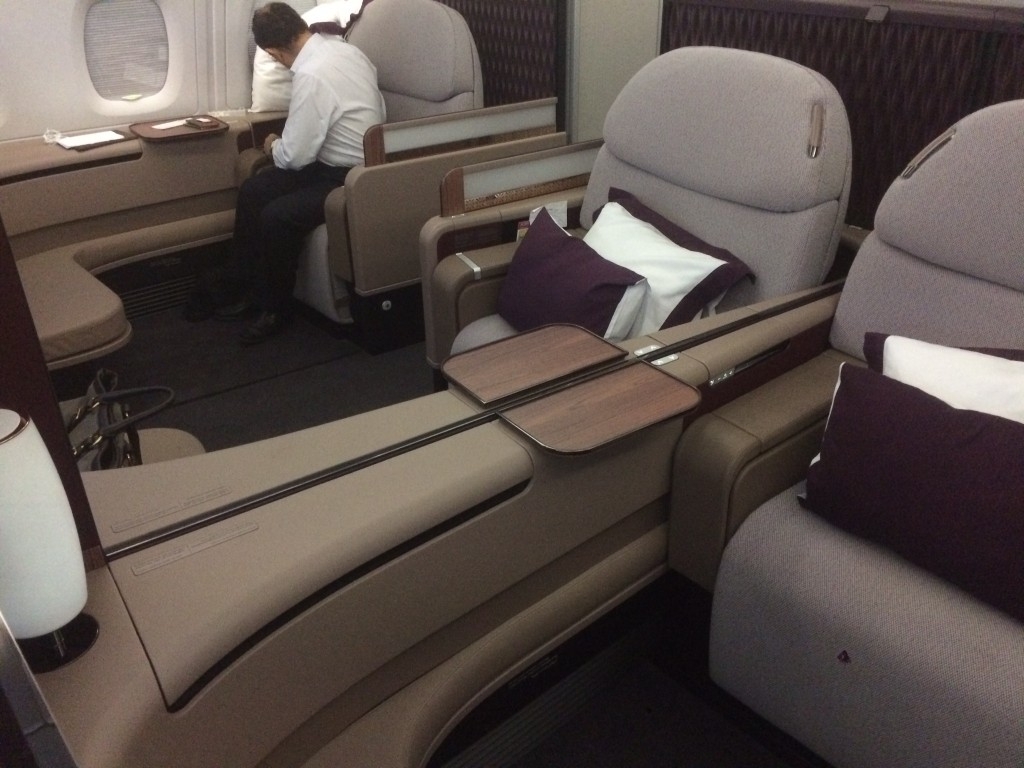 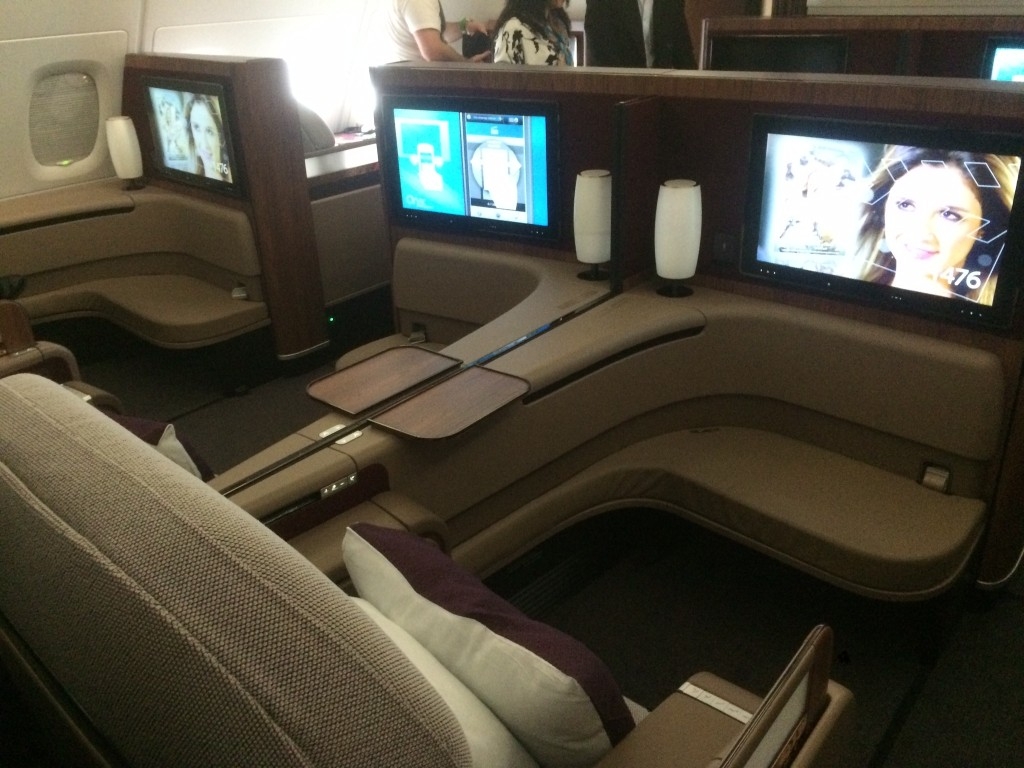 Compared to the Etihad First Class Apartment, of course, this is nothing to write home about.  Let’s be honest – only the Singapore Airlines First Class Suite comes close to what Etihad is now doing.  If you have the choice of Qatar or Etihad in First Class then (as long as you are guaranteed the Etihad A380) you would be crazy not to try it.

Privacy is OK but obviously limited.  There is, a la British Airways Club World, a partition which can be raised to separate you from your neighbour in the middle seats.  In the window seats, there is a partition on the aisle which allows you to sleep without being seen by the person across the aisle.

It is comfier than the Etihad apartment, however.  The seat there is simply not designed for ‘putting your feet up’.  It is fine for sitting, it is fine for sleeping (as you open out your bed) but for relaxing I was not too impressed.  The Qatar seat, on the other hand, worked perfectly.

As the cabin is so small there isn’t much else to show you.  At the front is a soft mini-bar and magazine stand which doubles up as a cupboard: 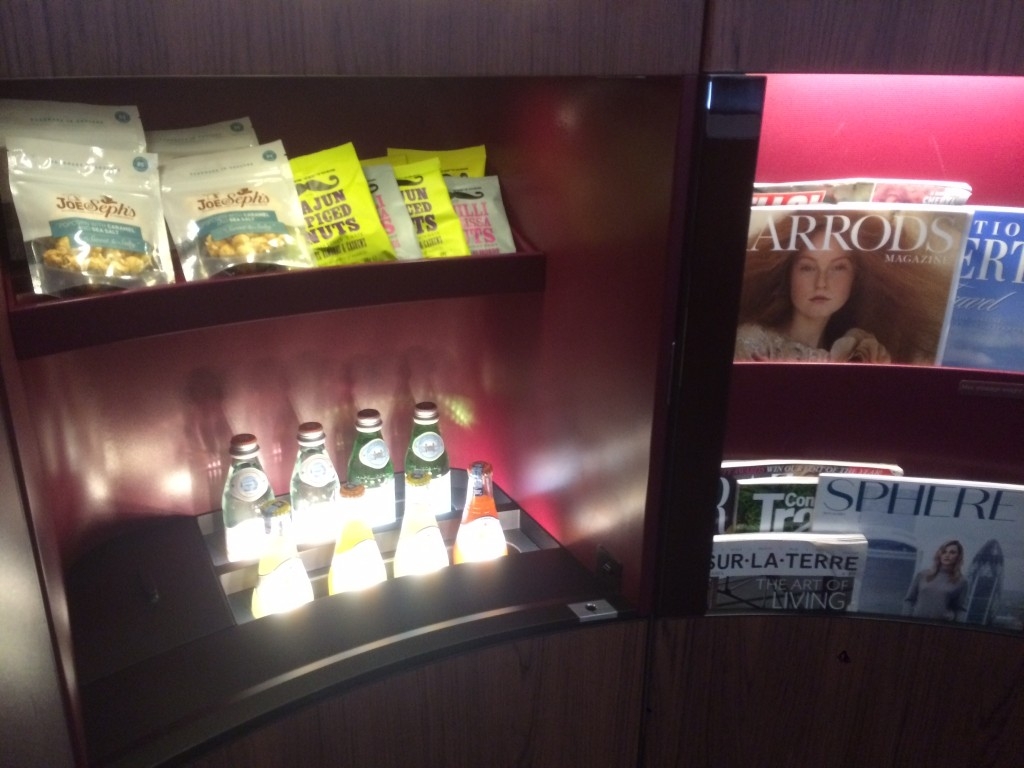 The bathroom is impressive.  As Qatar does not have showers, you have a very large bathroom indeed.  The toilet is under the leather pad at the top left in this photo.  It is a bit disconcerting when you first walk in because you can’t see it! 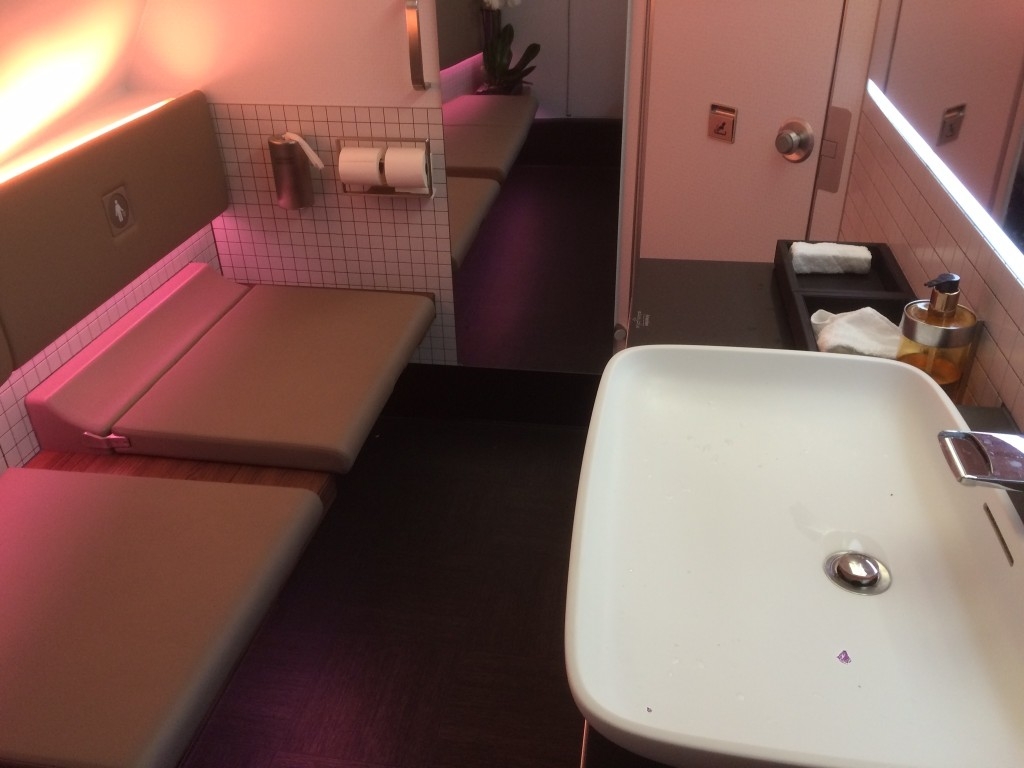 I didn’t take any pictures on the amenity kit.  It is Armani branded – the press photo they supply is this: 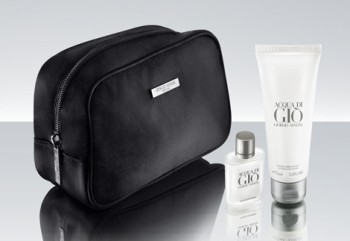 …. but I actually got the main ‘Armani’ line and not ‘Acqua Di Gio’.  It was a 20ml or 30ml bottle.  I think these are good branding exercises for the airlines – I was using the shower gel at home for a few weeks and it always reminded me of the flight when I picked it up.

Click here for Part 2 of my Qatar Airways A380 First Class review where I look at the A380 onboard bar and the Qatar First Class food and drink offering.

Qatar Airways has a special section of its website devoted to the A380 which you can find here.