This is Part 2 of my review of BA1, the British Airways service from London City to New York JFK, on an Airbus A318.

Part 1, which looks at the cabin and seat, can be found here.  This article focuses on the food and drink and IFE.

ba.com has a special page dedicated to the BA1 flight which you can find here.

Food and drink on BA1

BA1 used to set the standard for British Airways food, with the service originally operating in conjunction with the Roast restaurant in Borough Market.  Do&Co has now taken over and, whilst some elements reached their usual high standards, others did not.

I started off with glass of rose champagne, Besseret de Bellefon Grande Tradition Brut Rose, which is around £33 at retail: 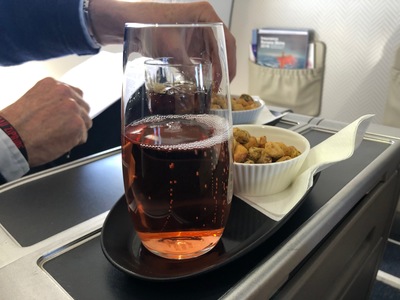 The standard champagne is the Canard-Duchene ‘Cuvee Leonie’ Brut which is £22 at Amazon.

Both served with bread basket 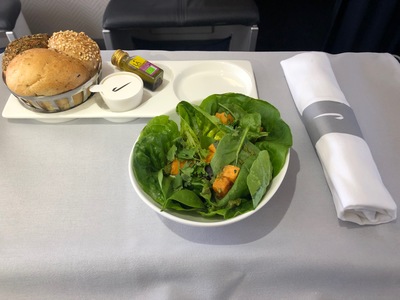 The bread was the signature Do & Co ‘three in one’ roll, which is great. The sweet potato salad looked very tired, although it appears better in the picture. If a salad could be said to be unenthusiastic, this is how it would look. It improved on tasting, with the base of coriander and chilli pesto adding some zing. I cannot comment on the balsamic vinaigrette since it was impossible to open the bottle. 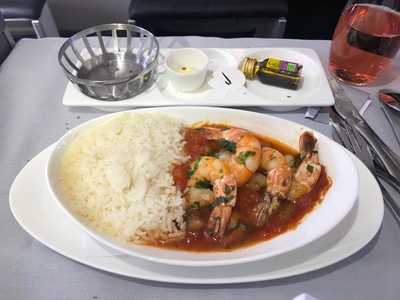 I went with the prawns. It was OK, although the sauce could have been tangier given that it was being served at altitude.

You will note that there was no attempt to clear away any of the excess cutlery or debris from the first course before the main was served. 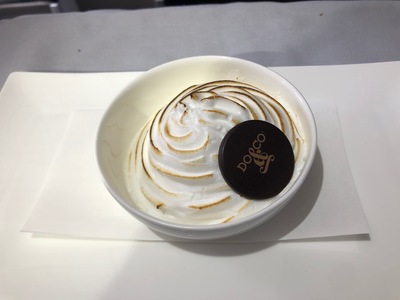 I took the panna cotta, which was good. In typical BA fashion, however, it was dessert or cheese.

Two hours before landing in JFK, afternoon tea was served. This consisted of: 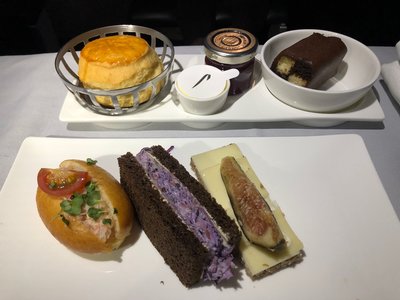 The Do&Co version of afternoon tea is a major improvement on the old Club World version.  For a start, you no longer get a plastic wrapped pack of sandwiches plonked in front of you on a plate.  The mixture of sandwiches provided still baffles me, however.

No newspapers or magazines are offered onboard or at the gate. Coupled with the lack of wi-fi and proper IFE, it made for a long seven hours.

I gave the iPad-based entertainment system a try.  The first set of headphones did not have the correct adaptor fitted.  The second set I was given did fit.  However, the maximum volume setting was ludicrously low – so low that I could hardly hear it over the noise of the aircraft.  I never found out if this was a faulty iPad – with the maximum volume setting locked too low – or faulty headphones.

The iPads used are now many years old, substantially thicker and with lower resolution screens than the current models.  Due to storage restrictions, there were only 14 movies plus a handful of TV, audio and gaming options.  To be fair, the movie and TV selection was decent as it usually is with British Airways. 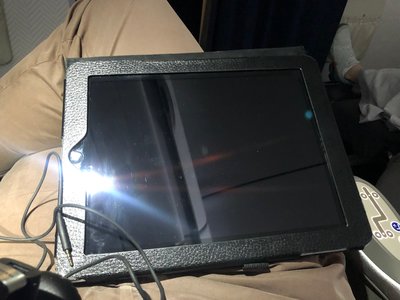 The headphones were Sennheiser PXC 550’s.

You can’t knock your arrival, landing as a domestic passenger.  I timed it, and I was in the Airtrain station in JFK Terminal 7 within five minutes of stepping off the plane (I was travelling just with hand baggage).  Coupled with my 2pm arrival, I was at my hotel by 3pm and had enough time to actually get something done on my arrival day – a rarity when I travel to New York. 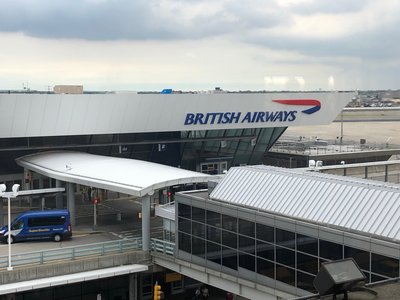 The A318 BA1 service to New York via Shannon is generally called the ‘baby bus’ in the trade. There is a ring of truth in this joke, because in many ways a bus is what it is – a service for people who shuttle back and forth to New York on a regular basis and are not bothered about comfort or fripperies.

Obviously you are giving your customer the flat bed they require in business class, but the rest of the trip – the messy situation at City, no lounges, poor gate experience, lack of wi-fi, poor IFE provision, the Shannon stop – points to a service which is sold more on convenience than anything else.

Judging by the full house on my Monday morning flight you may think it is a recipe that works.  Judging by the weak loads reported on other flights, and the scapping of BA3/BA4 in 2016, I think it doesn’t.

I DO still recommend BA1 if you want to arrive in New York early in the day or live conveniently for London City.  It isn’t the right choice for anyone splashing out for a special treat – for that I recommend you head to Heathrow for a superior in-airport and onboard experience.  Gatwick, with the impressive new BA lounge complex, is also worth considering.

If you are an aviation fan and haven’t ticked off BA1 yet, I would do it sooner rather than later. Even if the state of City Airport and the poor in-flight experience don’t kill it off, I am fairly sure that Crossrail, BA’s new Club Suite / the new Virgin Upper Class Suite and the continued expansion of Global Entry will.

You can find out more about BA’s dedicated London City to New York service on this special page of ba.com