This is our review of the new Hilton Garden Inn at London Heathrow Terminal 2.

The Hilton Garden Inn at Heathrow Terminal 2 has now been open for a couple of weeks, so we thought it was time to check it out.

HFP paid the £90 cost of the room itself.  We were not actually flying anywhere – hanging around in Terminal 2 is what we do for fun!

As you can see from the image below, this is an oddly shaped hotel squeezed into a small patch of land between the car park and the road.  I’m not sure if it was previously empty or if another structure was demolished. 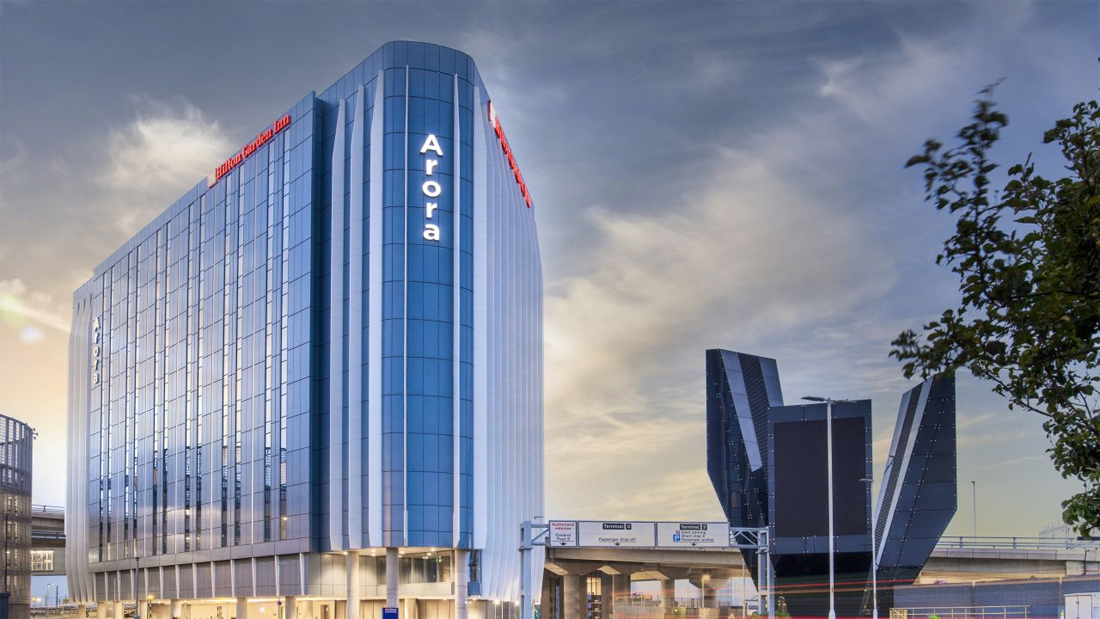 What is a Hilton Garden Inn?

This is the obvious question, as least for our UK readers.  There are only a handful of Hilton Garden Inn hotels in the UK and some of those – the best known is at Hatton Cross, just outside Heathrow and reviewed here – were conversions from other brands.

As a new build, Heathrow Terminal 2 is presumably designed to the ‘full’ HGI specification.  What this seems to mean is:

It is certainly NOT at the level of a new Hilton such as, say, London Bankside.  What I don’t fully understand is how it differs from a Hampton by Hilton.  Both are pitched at the three star market.  Arguably Hilton Garden Inn has a more corporate feel with Hampton targeting the leisure / family market.  Hampton has free breakfast for all guests whilst Hilton Garden Inn does not.

How do you get to Hilton Garden Inn Heathrow Terminal 2?

Whilst Terminal 2 and Terminal 3 are connected via a series of underground corridors which link both of them to the tube and Heathrow Express platforms, the Hilton Garden Inn is techinically in Terminal 2.  It is, basically, stuck onto the back of the car park!

It couldn’t be easier to find as long as you do one thing – leave Terminal 2 Arrivals by the door directly opposite the Plaza Premium Arrivals Lounge. 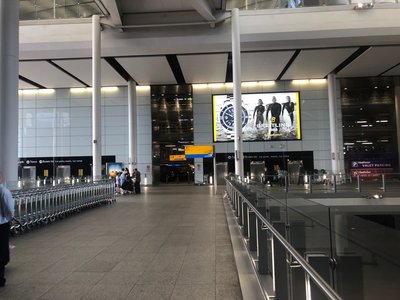 If you do this, it is idiot proof.  Walk forwards into the car park, keep walking forwards through the car park, do not move left or right, and you will be in the hotel!  You do NOT go up any steps so it is easy if you have luggage. 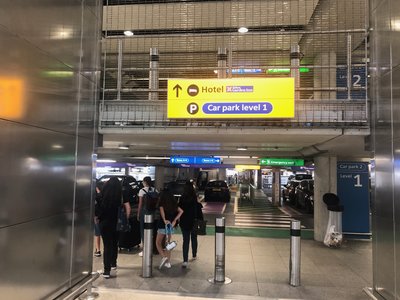 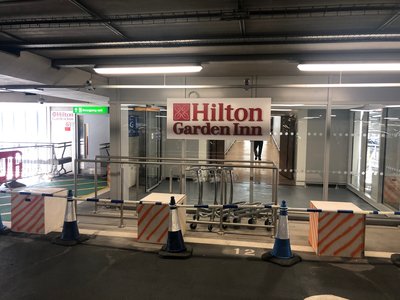 The ‘new hotel’ smell hits you as soon as you enter the walkway from the car park to the lobby.  The lobby is actually a lot funkier than the rooms: 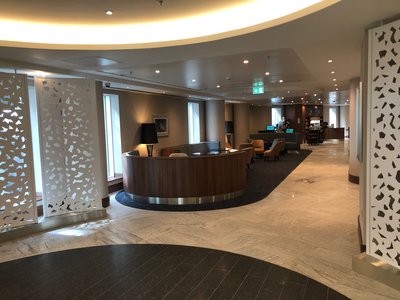 I was checked in quickly and my Diamond status acknowledged.  This didn’t seem to count for anything, though, as I was given a room on Level 5 – the first floor of bedrooms.  It goes as high as Level 13.

It meant I had this view from my window.  I am grateful that the Hilton Garden Inn has the best soundproofing I have ever experienced! 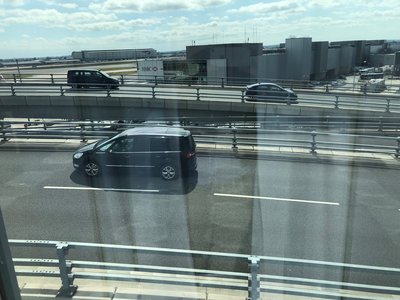 The first thing that hit me when I opened the door was a blast of cold air.  The thermostat had been set to a rather aggressive 18 degrees compared to the usual 22-24 degree. 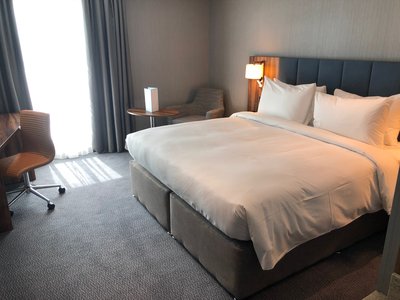 The chair is also grey, livened up (a very tiny bit) by a dark wood table! 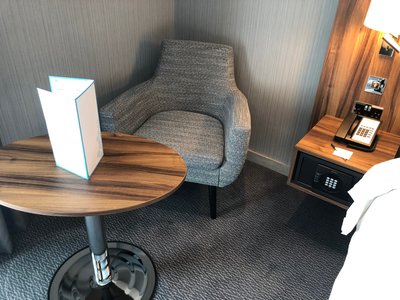 There is no wardrobe, only a small open rail, but that is perfectly fine for an overnight stay. 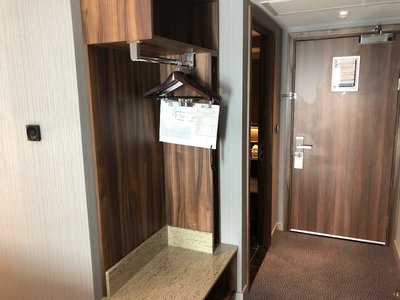 Full credit to Hilton for including a desk.  The curve was unnecessary, cutting down the working space, but apart from that it was fine.  There were four UK plug sockets and two USB chargers within easy reach.

The desk also contained a kettle, tea / coffee and a free bottle of Hildon water.  There is an empty fridge, visible in the picture under the desk, but no mini-bar – the fridge is for any items you bring yourself or buy in the lobby shop. 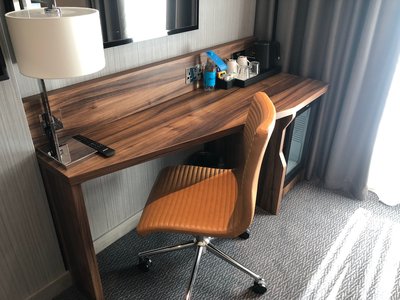 The bathroom contained a shower but no tub.   It was high quality, with a choice of rainfall or hand-held.  Whilst the water pressure was perfect, the water ‘flow’ was a little odd – it was as if the holes in the shower head were smaller than normal!  It looked like a lot of water was coming out but you didn’t feel that you were getting very wet. 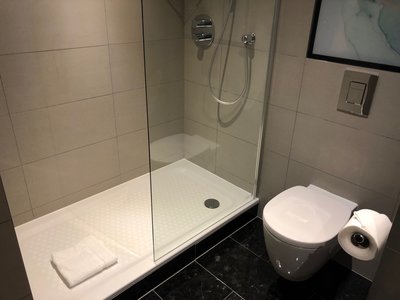 Toiletries were by Crabtree & Evelyn: 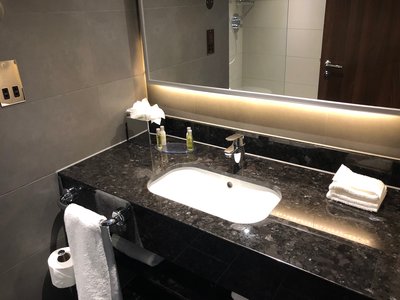 The view was, of course, terrible as I mentioned above.  However, if I had been higher up, I would have had a good view of the runway.  I am a little confused as to why a Diamond member – and my status was acknowledged at check-in – was given a room on Level 5 which is clearly the worst one.

(EDIT: it seems that a Diamond does NOT get upgraded at a HGI.  You learn something new every day!  However, this still does not explain why you would allocate them a standard room on the worst possible floor.)

And no mobile signal …..

The Vodafone signal in my room was appalling.  It never got beyond two bars and was often at one bar.  The one telephone call I attempted to make had terrible reception and eventually cut out.  I ended up using Skype which was fine, as the wi-fi was very good.

The hotel will soon have a rooftop bar which promises to have some exceptional views.  It will not open until August, I believe, so I couldn’t test it out.

In the lobby is a small snack shop: 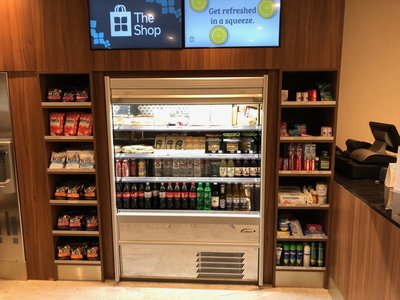 The bar and restaurant

Both are well designed and pleasant places to spend some time, despite being on the lower level and so at the same level as the supports holding up the road overhead.

Here is a shot of the bar.  Only after I had eaten in the restaurant did I realise that the bar has its own menu and I could have eaten there instead: 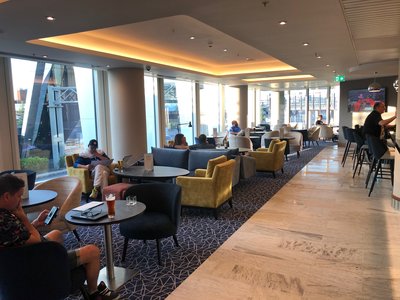 The restaurant was OK.  The staff were great, the menu was well presented and the mix of ‘classics’ – grilled steak or chicken, burgers, fish and chips, chicken tikka, pizza, pasta, salads – probably well suited to the target market. 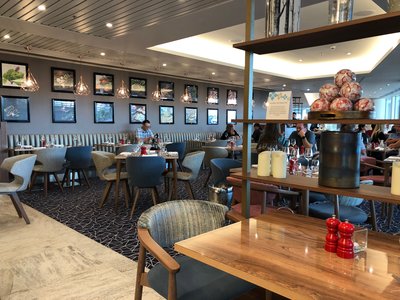 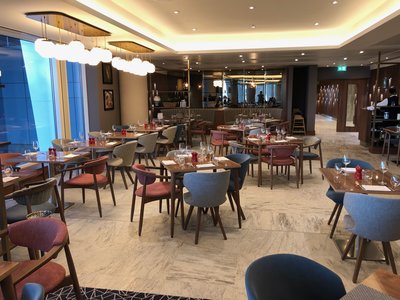 Here was my £15.50 fish and chips – the fish looked overcooked but was actually fine: 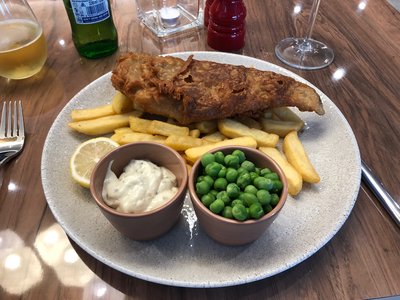 Here’s a tip.  Do not do what I did, which is accept a seat near the entrance.  Your view is basically ‘all the trash that the hotel and Heathrow decided to dump under the ring road’.  Not attractive.

Move towards the back of the room and you can look at this instead, although only a handful of table have this view: 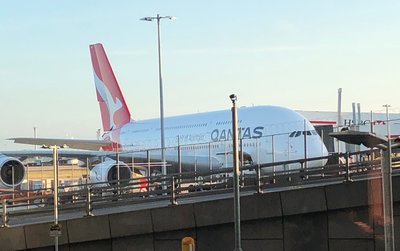 To be honest, I don’t understand why the hotel insisted on building a rooftop bar and didn’t move the restaurant to the top floor instead. The ambience would have been much improved.

Hilton Honors Diamond members do not AUTOMATICALLY get free breakfast at a Hilton Garden Inn.

HGI is the ONLY Hilton brand where a Diamond has to opt in to get a free breakfast.

You CAN have it, but you must change your ‘MyWay’ benefits option 24 hours before checking in.  The default MyWay option is to refuse the free breakfast and award you 750 bonus points – which I’d value at £3 – instead.  Don’t forget to do this!

Breakfast itself was perfectly acceptable for a Holiday Inn-style hotel, with a decent selection of cereals, pastries and hot items.  See: 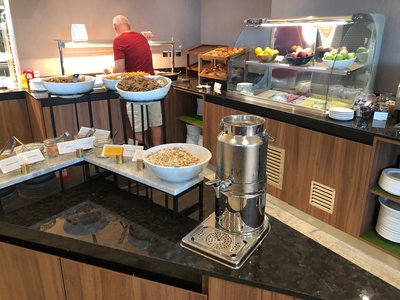 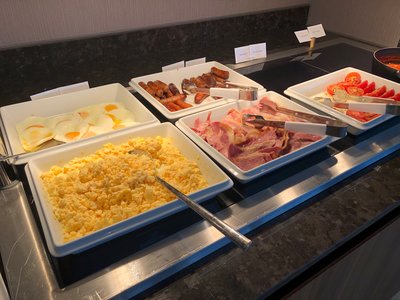 It isn’t life changing, however, and if you have airport lounge access then I certainly wouldn’t bother paying to eat breakfast in the hotel.

What did I think of the Hilton Garden Inn Heathrow Terminal 2?  I’m in two minds, to be honest.

The key positive points are a) that the hotel is brand new, so everything is modern and fresh and b) it is directly connected to Terminal 2, saving the cost and time of taking the Hotel Hoppa bus.

Arora, who own it (and who also own the Sofitel Terminal 5 and the combined Crowne Plaza / Holiday Inn Express in Terminal 4) could have done better.  The room decoration scheme is too dull and the restaurant should be on the roof.  Some Vodafone mobile phone reception would be handy too, as would not having housekeeping banging on my door at 8.45am – especially as reception had asked me when I was leaving and I said 10am.

Having said all that ….. if you are flying from Terminal 2, it isn’t worth staying at one of the other hotels just to avoid this place.  The staff are very pleasant, the restaurant and bar are smart and the soundproofing is exceptional.  Don’t expect to be blown away though.

The good news is that, following the burst of recent activity, we now have a lot of good hotels directly connected to Heathrow’s terminals.

There are very few airports which have so many different hotels directly linked to their terminals, especially at lower price points, which is good news for everyone using Heathrow.

The Hilton Garden Inn Heathrow Terminal 2 website is here if you want to book or find out more.