Long time readers of HFP will know that when you are flying from Heathrow Terminal 3 you are spoilt for choice when it comes to airline lounges.

The excellent Qantas lounge (review here) has now been open for almost two years, and is regarded as one of the best in the UK.  You also have the Cathay Pacific lounges (review) which are a great place to go if you have a BA Gold card and would like to enjoy some fine restaurant dining in the First Class lounge.

If that wasn’t enough, American Express has also made Heathrow Terminal 3 its home for one of the first Centurion lounges to open outside the US. Existing Centurion lounges have a very good reputation so this is one to keep an eye out for when it opens in early 2020 – vague image of the entrance below!

As well as the amazing Qantas and Cathay Pacific lounges, you can also visit the T3 American Airlines and British Airways Galleries lounges.  These are both perfectly acceptable but not in the same league as the others.  If you have a Priority Pass card, there are also two excellent independent lounges – Club Aspire (reviewed here) and No 1 Lounge (reviewed here).

Have you flown from Terminal 3 in a while?

All this means that Heathrow Terminal 3 is the place to be if you want to relax in style before a British Airways flight (unless, of course, you can use the BA Concorde Room in Terminal 5!)

If you thinking about weekend break destinations for an Autumn trip, you might want to put a British Airways Terminal 3 route on your list.

British Airways is currently running a sale, as we covered here.  As it happens, one of the best Club Europe deals – Helsinki for £210 return, which earns a whopping 160 British Airways Executive Club tier points – departs from Terminal 3.

Remember that you need to be travelling in Club Europe / Club World to access the lounges, or have a British Airways Silver card or above, or oneworld equivalent.  You will need a BA Gold card or equivalent to access the First Class private dining section of the Cathay lounge.

You should also note that the Qantas lounge is only open from 8am to 8.30pm so it is not an option for very early or late evening flights. 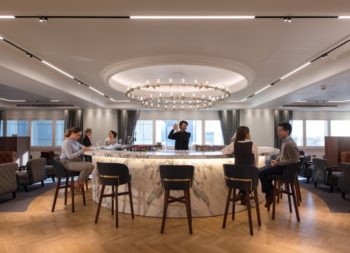 Which BA routes operate from Terminal 3?

I couldn’t find an official list anywhere so this is our best DIY attempt – if there are any errors we will update them during the day.  It reflects the changes taking place when the Winter timetable launches in late October.

This list only covers BA flights.  A business class flight on any other oneworld airline would also work.  A very attractive option would be the handful of Finnair‘s Helsinki flights which use the new A350 long-haul aircraft which I reviewed here.  Book yourself in Business Class, for cash or Avios, and you can check out the new Terminal 3 lounges and then fly to Helsinki on a flat bed!

This is where I think we are with British Airways departures from Heathrow Terminal 3:

If you are thinking of making a booking in the current British Airways sale, perhaps it is worth giving a Terminal 3 destination a try?