This article shows you how to reach the hotels around Heathrow Airport for free using the local bus network, rather than paying for the Hotel Hoppa shuttle bus.

As I have mentioned a few times on Head for Points, my preferred ‘near Heathrow’ hotel – if you don’t want to pay a premium for the hotels attached to the terminals – is the Hilton Garden Inn at Hatton Cross (Hilton Garden Inn Hatton Cross reviewed here, but it has just unveiled a major refurbishment).  My main selling point in recommending this hotel is that it sits next to Hatton Cross tube station so you can avoid the Heathrow Hoppa shuttle buses used by other off-airport hotels.

(You also have the brand new, but rather odd, Atrium Hotel at Hatton Cross which we reviewed here.  Go for the Hilton if you can.) 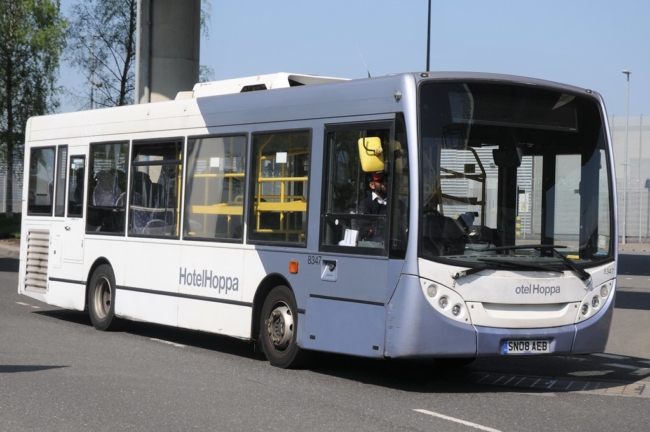 Most people hate the Hotel Hoppa buses.  Unlike virtually all other major airports, at Heathrow hotel shuttle buses are banned.  Instead, Rotala, which bought the business from National Express a couple of years ago, has a monopoly contract to operate the ‘Hotel Hoppa’ shuttle service to 34 different hotels around the airport.

To be honest, I have always been happy with the idea of not letting the Heathrow Airport hotels run their own shuttle buses.  We all know from experience at other airports how chaotic arrival terminals can be with hotel and car hire shuttle buses all jostling for space.

However, like any monopoly, Rotala has not been shy in exploiting it.  It currently costs a ludicrous £6 per person one-way or £11 return if you pay cash to the driver.  There is a 50p saving if you book in advance or use a kiosk at the airport.  Children under 15 travel for free.

To add insult to financial injury, most Hoppa routes involve a circuitous drive around the area.  Most will visit 3-4 other properties before depositing you at yours.  If you are lucky and are the first to be dropped off, all that means is that you will face a longer trip in the morning!  The Hotel Hoppa website is here.

How can you avoid the £11 return Hotel Hoppa fee?

There are ways of avoiding this fee, which adds up to £22 to your overnight costs for a couple.

Plan A, the obvious answer, is to stay at a hotel in the airport.

Whilst technically there is a way they can arrange to ‘push in’ to the queue on their return, you can imagine the response you will get when you ask a driver to give up a £75+ trip to Central London in return for a quick run to your hotel.  Heathrow is outside of the zone whereby black cabs cannot refuse a fare.

Instead, Plan B is to take a free standard London bus.

Within the airport perimeter, which includes all of the hotels on Bath Road, public transport is free.  Not a lot of people know this.  If you make your way to the Heathrow bus station you can hop on a standard red bus which will drop you near your hotel – albeit not outside the front door, which the Hoppa would do.

This map (PDF) is a schematic of the free bus routes around the airport.  It was updated in May 2018 and is the latest version available.

All of the major Heathrow hotels are featured on that map.  One exception is the DoubleTree by Hilton Heathrow T1 ,2, 3 which is quite a long way outside the airport –  you will need to pay for a £1.50 bus ticket if you are heading here as it is outside the free travel zone.  Remember that cash is not accepted on the London bus network so you would need an Oyster card or contactless credit or debit card.