If I have ever flown American Airlines before, it would have been 20+ years ago as a teenager.  Those of you who use them on a regular basis for US domestic flights will therefore find my thoughts below relatively simplistic, but it was all new to me!

As a short-haul US redemption, I was able to book an economy redemption ticket for 4,500 Avios (one way) plus a whopping £1.60 of tax.  (I never saw a first class seat for redemption.)

Given this bargain price, plus the easy access to Boston Logan airport (10 minutes from the InterContinental by taxi using the new tunnels) it was a no-brainer.  Was I going from New York to Boston, I would probably have taken the train given the effort required to get to Kennedy.

I was able to check in online from ba.com which links you into aa.com – a nice touch.  What was odd was seating.

For a start, the AA check-in site asks if you WANT to select a seat.  Why wouldn’t you?!  Do people let AA randomly assign one?!

I was then presented with a seating chart.  AA split its economy seats into three categories – Main Cabin Extra (the front rows of economy, with extra leg room) and Preferred, which seemed to be the aisle seats in the rest of the first half of the cabin, plus ‘everything else’.

I had been given an ‘everything else’ seat in Row 20.  I thought I’d see how much AA wanted for Main Cabin Extra, but no price appeared.  I clicked through, still no price, seat assigned.  I therefore assume that my BA Silver status was enough to get Main Cabin Extra for free.  In which case, though, why give me a seat in Row 20 in the first place?  And why not say that I can select Main Cabin Extra?  Most BA Silvers would probably have assumed they had to pick from the ‘normal’ seats. 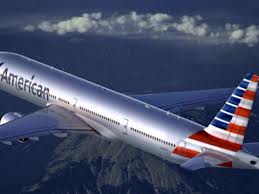 At Logan, I could use the Admirals Club lounge via my BA Silver card.  (I could also use the premium security line, but in Heathrow fashion it was no shorter than the main line.   In any event, I was through within 5 minutes.)

The lounge was very large and with a large number of cubicles with PC’s for working – far better than BA’s IT facilities.  Where the lounge fails, though, is the lack of free food (all food is charged), the small list of free drinks (beer, wine, you pay for the rest) and the lack of interesting magazines (just free titles) and almost total lack of newspapers.

The flight boarded on time and my BA Silver let me use the priority boarding line.  Unlike BA, AA has ‘proper’ First Class seating with 2 x 2.  My economy seat back in Row 15 (exit row) had a huge amount of leg room – more than a BA exit row – but felt very narrow due to wide arm rests.

The cabin crew, to be fair, were not the ‘Golden Girls’ lookalikes that are often described!  However, neither were they on the ball.  The emergency exit row in front of mine had 2 staff members in it, who the crew always stopped to chat with.  The crew also ignored – despite seeing it – that the man in my exit row by the window had placed a large bag on the floor, blocking the exit.

Refreshments during the flight constituted a drinks round.  I foolishly asked for a glass of wine and was charge $7 for it!  I’m not sure where the line is drawn between free and paid drinks.

There is little more to say, except that it is worth looking at the SkyMall shopping catalogue in your seat pocket, which is full of weird and wonderful stuff you can order online once you leave the plane.  Forget perfume and pens, SkyMall is a collection of wierd and wonderful stuff the likes of which the UK hasn’t seen since the heyday of the Innovations catalogue!

Boston to New York JFK is a short flight, and I was soon on the Skytrain to the subway and on my way to my third InterContinental in a week ….