This is my review of the Crowne Plaza London Kensington hotel.

If you have ever driven from Central London to Heathrow, you will have passed the Crowne Plaza London Kensington on Cromwell Road, somewhat dwarfed by the 1960’s monstrosity that is the Holiday Inn Kensington Forum across the road.

Converted from a row of Georgian townhouses, it looks very unprepossessing.  I have occasionally wondered what sort of hotel could be there to warrant Crowne Plaza branding. 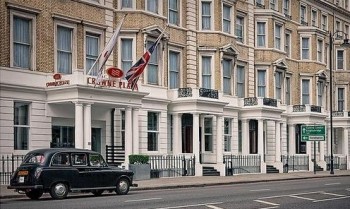 On Tuesday I got to find out, as I was invited to review the hotel at a press event to celebrate the relaunch following a top to bottom redecoration.  It is very pleasant indeed, as it turns out.

Inside the large modern lobby you would not imagine you were inside converted houses: 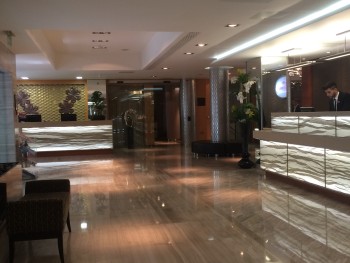 The hotel is surprisingly deep with a lot of public space including a pleasant library: 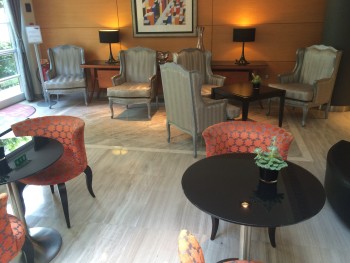 And a decent sized club lounge on the ground floor: 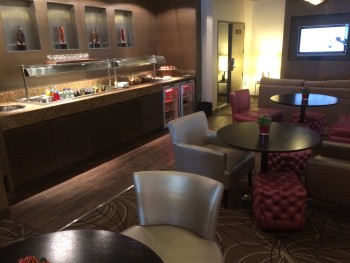 The biggest shock is the big garden at the rear – bigger than this picture shows – which must be fantastic in Summer.  There is also a church behind the hotel which gives for more interesting views from the rear rooms than usual: 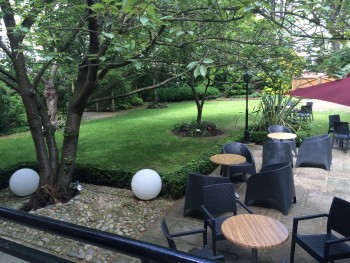 The rooms – very smartly redecorated, including full length mirrors which will satisfy every female guest – were also a surprise.  Of the 162 rooms, 70 are ‘double doubles’. 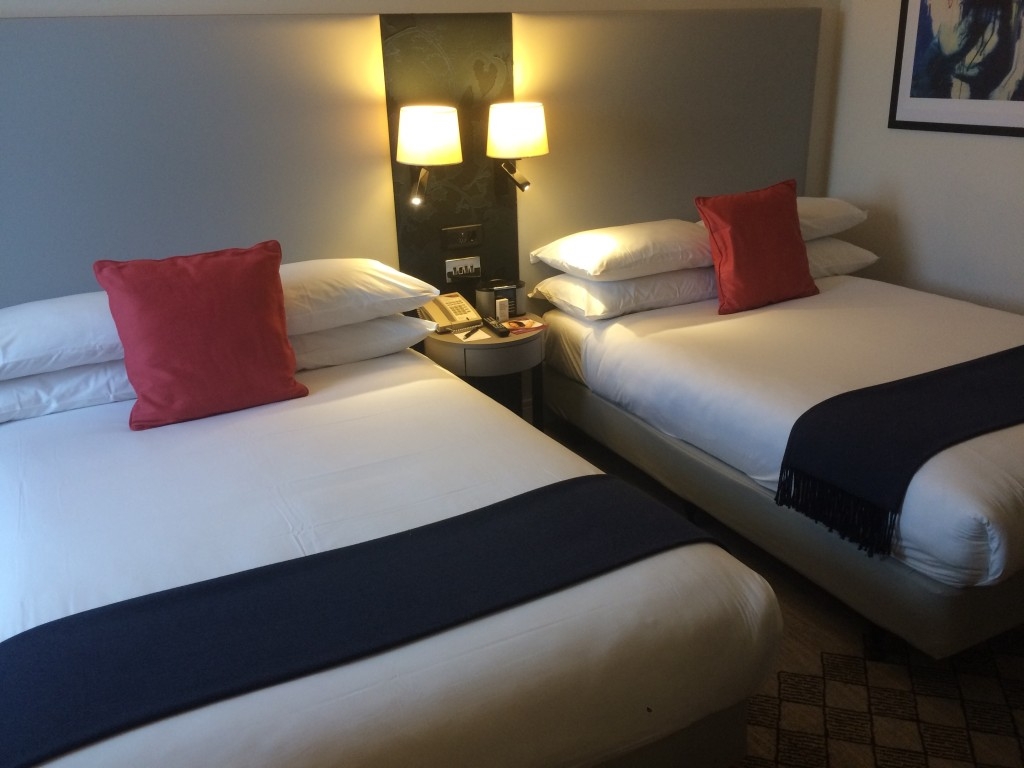 This is very common in US hotels but less so in the UK.  It allows a family to all sleep in one room instead of paying for two, whilst a single guest or a couple have somewhere to drape their clothes.  (Families who want more space will be pleased to know that there are a lot of connecting room combinations available as well.) 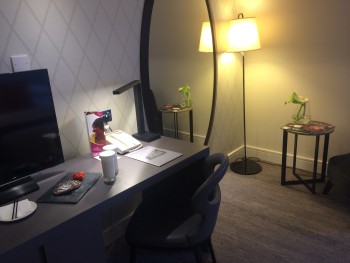 The highlights, for me, were the duplex suites.  These were apparently built because of a requirement to match the new interior with the listed exterior.  The result is a series of two-bathroom suites with a bedroom upstairs and a set of stairs leading to …. 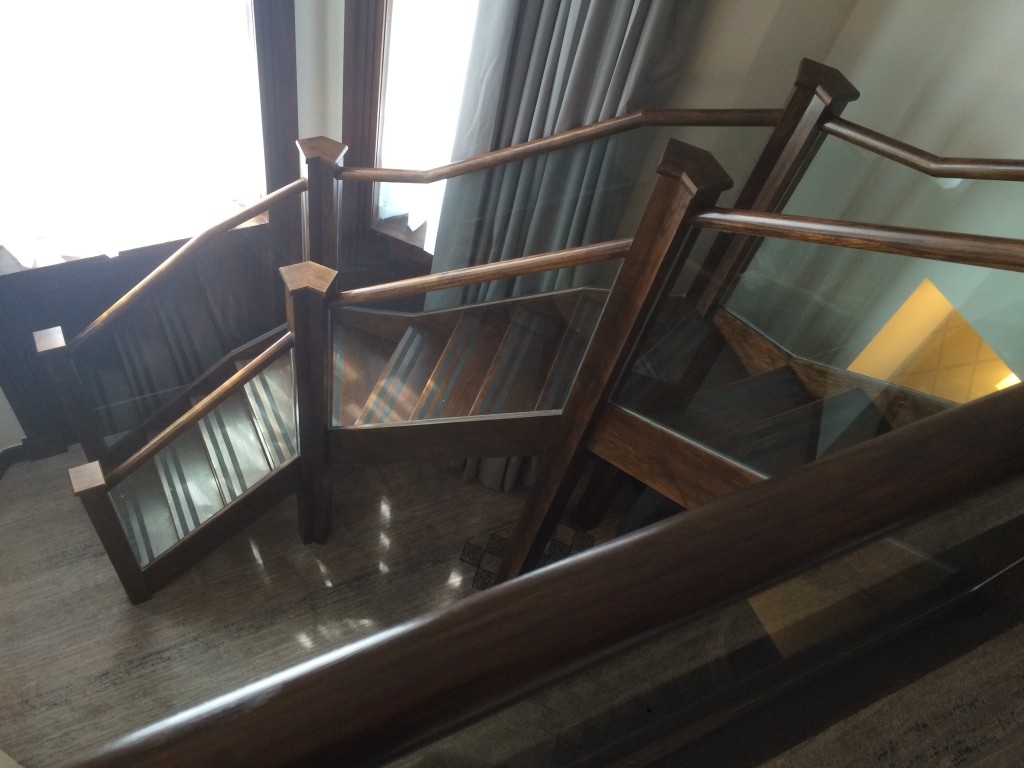 …. a sitting area downstairs (the sofa is a sofa bed so also good for families): 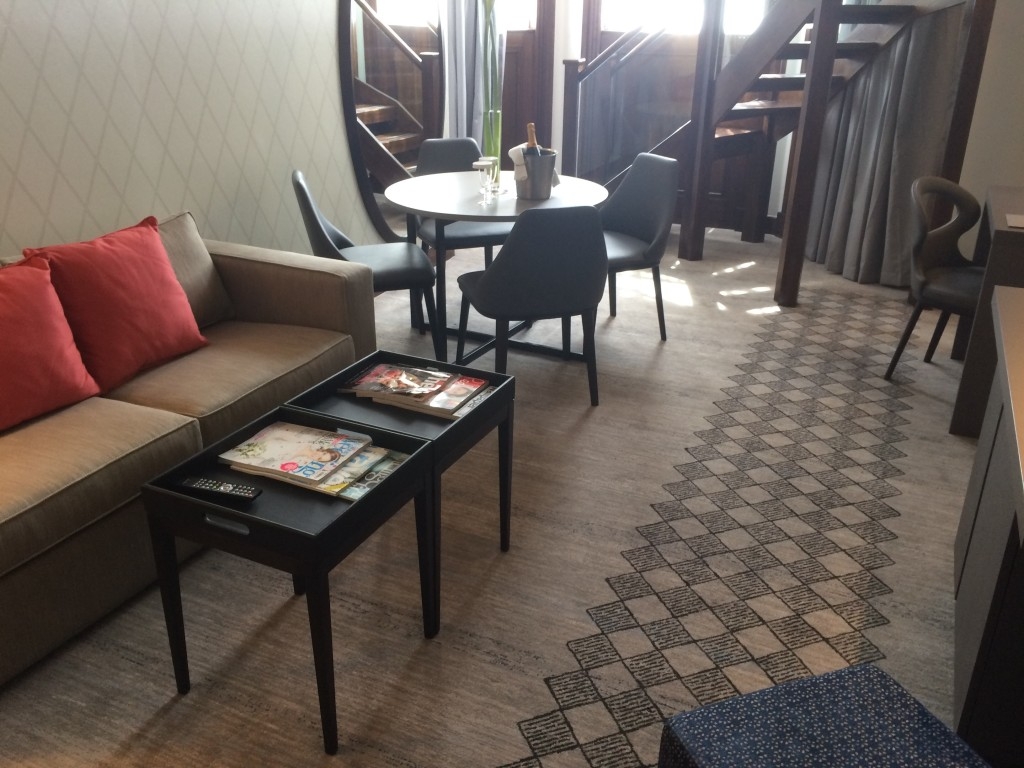 There is also a gym, which I didn’t see, and a number of meeting rooms.  The restaurant on the ground floor, which has also had a very modern makeover, is called Umami and is Asian themed.

One benefit of press tours is that you learn a few facts which the average guest would never pick up.  A series of black and white art photographs around the hotel – very professionally done – turn out to have been taken by a staff member and feature other hotel employees!  Tony the concierge, who took me around, has been with the hotel through its various incarnations since 1991.

Apparently the Crowne Plaza London Kensington ran at 91% occupancy last year, even before the refurbishment.  The average guest rating on the IHG website (4.5) is higher than Crowne Plaza The City and equal to InterContinental Park Lane.

It is smaller than most of the major London business hotels and, being in Kensington, is walkable to the museums at South Kensington.  Kings Road and Harrods are a short taxi ride away or two stops on the tube (Gloucester Road is the nearest station).