This is Part 2 of my review of the Business Premier and Standard Premier service on the new Eurostar e320 trains.  Part 1, also published today, can be found here and includes my thoughts on the seats and some background information on the new fleet.

In Business Premier, but not Standard Premier, the catering is overseen by Raymond Blanc of Le Manoir aux Quat’Saisons.

It is still underpowered compared to what I used to get on Virgin West Coast when I was making regular trips to Birmingham, but it did the job.

You start, for breakfast, with a tray of water / juice / yoghurt / bread / pastries: The croissant was not as good as the ones in the lounge.  I never understand why Eurostar has always struggled with fresh pastries.  I give British Airways some leeway when they struggle to serve good bakery items 11 hours into a long haul flight.  I don’t understand why Eurostar cannot order large quantities of high quality croissants for ‘just in time’ loading and serving.

This was followed by a choice of either:

Everyone gets a fruit plate as well.

I went for the lighter option: …. and it was fine.  The Blanc spark of creativity came from the paprika mayonnaise, not something I would usually add to smoked salmon but which worked very well.

My biggest gripe is that the crew disappear after your meal has been served, presumably to serve other carriages, and are never seen again.  If you want another cup of coffee, it is tricky to track one down.  I would have liked to see another couple of passes down the cabin later in the journey offering top-ups.

Whilst we’re looking at catering, this is the meal I received in Standard Premier on the way back: It is served in one go on one tray and will always be a cold meal.  As you can see, I took a meat and potato plate with a pudding, some bread and a mini bottle of white wine.  It was perfectly acceptable but not substantially ahead of what British Airways would serve in Club Europe.  They could do a lot more with the food if they wanted given that Eurostar is free of the restrictions imposed on in-flight catering.

What else in new on the Eurostar e320 fleet?

There are a lot more changes on the new Eurostar fleet, much of which I didn’t see because it isn’t easy to walk through Eurostar trains.  You will also find:

baby changing facilities in the toilets

an average of 13% more luggage space per passenger, apparently, with luggage racks in the centre of carriages to enable passengers to keep an eye on their bags and new look cafe bars, Cafe Metropole, which do look cool (this is a Eurostar press photo): 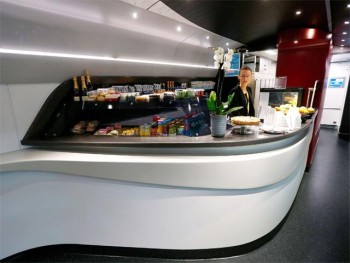 The e320 is clearly ‘evolution’ not ‘revolution’ for Eurostar and at the end of the day there is only so much you can do with a train.

After the initial surprise, I was perfectly happy with the new slimline seating for a two hour journey.  The new entertainment system and, when fully working, on-train wi-fi and the copious number of power sockets (now in economy as well) are an improvement.

The carriages are light and bright.  I have seen comments elsewhere about the trains feeling bumpier than the old ones but I honestly didn’t notice that.  It would be good to see more money spent on catering but the company seems to have decided that as long as it matches the airlines it will be fine.

If I have any concerns, it is overcapacity at St Pancras.  Boarding an additional 150 passengers per train puts an additional squeeze on the boarding ramps and, when the new Amsterdam services begin, the concourse will become even more crowded.  Gare du Nord is in the middle of a major overhaul to increase Eurostar capacity but nothing is happening in London – luckily I have my Amex Platinum card for lounge access.

I have just booked myself a one-way ticket back from Paris later this month in Standard Premier so I am happy to put my money where my mouth is when continuing to recommend the service.