We are now on the least exciting bit of my recent Aer Lingus business class redemption from London to Boston, and back, via Dublin.

If you didn’t see the earlier articles, Aer Lingus gave me a return business class flight to Boston so we could see what you would get if you chose to use your Avios, or pay cash, to fly them to North America.  Head for Points paid for all of its own expenses, apart from two nights hotel accommodation in Boston which Hilton provided. 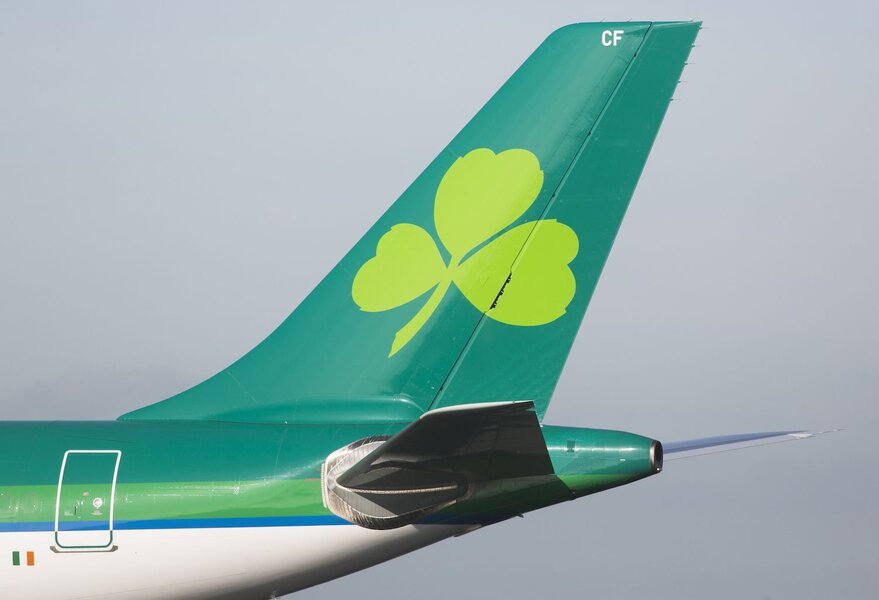 Every part of this trip so far had been impressive.  We’ve had:

the Aer Lingus business class seat and service, which is a major improvement on British Airways Club World (read here)

After three nights in Boston, it was time to head home.

Aer Lingus changed their terminal at Boston Logan Airport from E to C back in May 2016.  You can find several reviews online of an Aer Lingus lounge in Boston that looks quite different from the one I went to.

With the change of terminal Aer Lingus seems to have dropped their own branded lounge and is instead using ‘The Lounge’.  This is also used by Emirates and TAP and can also be accessed using Priority Pass, Lounge Club or Diners Club.

‘The Lounge’ is located by Gate C19 and was about a three minute walk from my gate.

There was just one person in front of me at the lounge reception. As I was getting access with my boarding pass rather than a lounge club card it only took a few seconds to scan it and for me to enter the lounge. 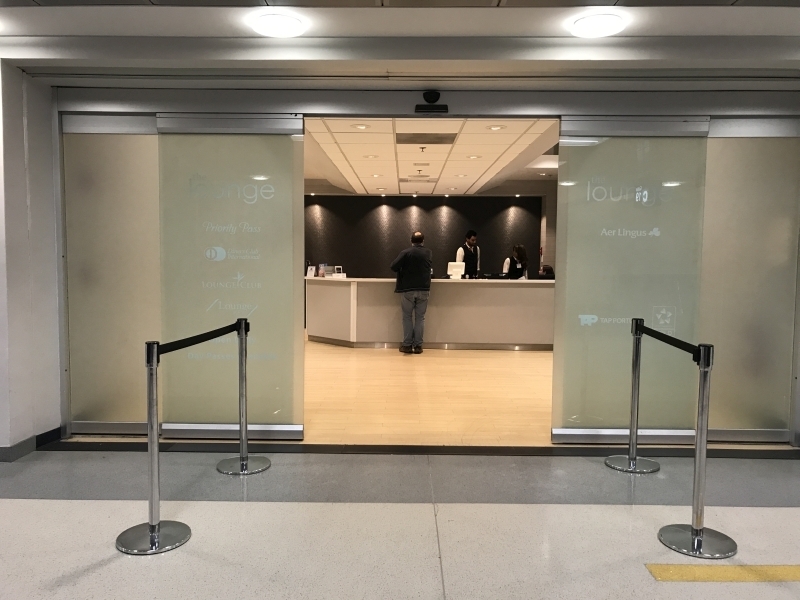 The first thing I noticed when entering the lounge was that almost every seat was taken. As I didn’t want to run around taking pictures of strangers, the ones in this review are not the best. Apologies for that.

As you walk into the lounge there is a food area around the corner to the left, a staffed bar at the far end and several dining tables with four seats.  Solo diners seem to gravitate towards a row of bar stools facing the window.  Toilets, but no shower rooms, were tucked away to the left of the bar by the kitchen area.

It was 9pm when I entered the lounge and the blinds were down. Apparently you have a great view onto the runway during the day.

The bar served wine, beer and soft drinks as well as mixers in single servings. 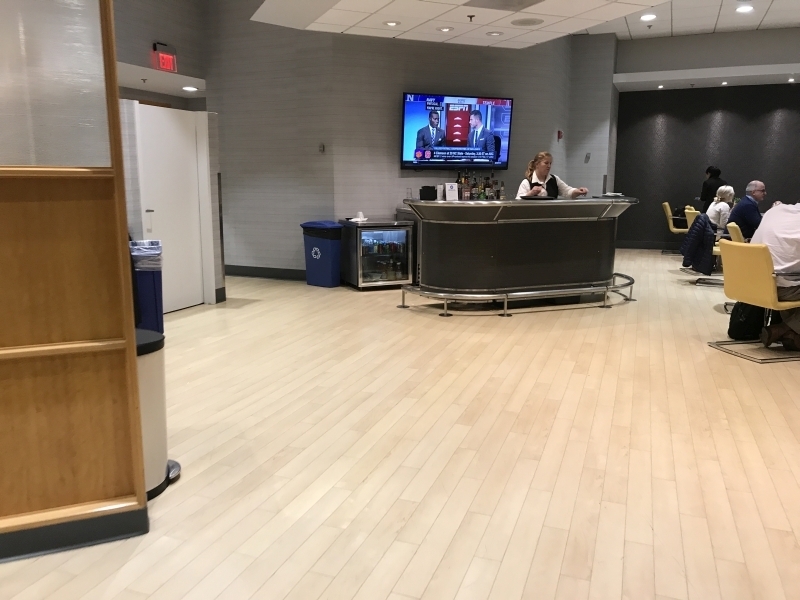 The larger sitting area below is to the right of the lounge as you walk in. There was a selection of armchairs with coffee tables as well as two separate areas at the far back with a half wall for privacy.

There were screens with the flight departures on the wall and no announcements were made. 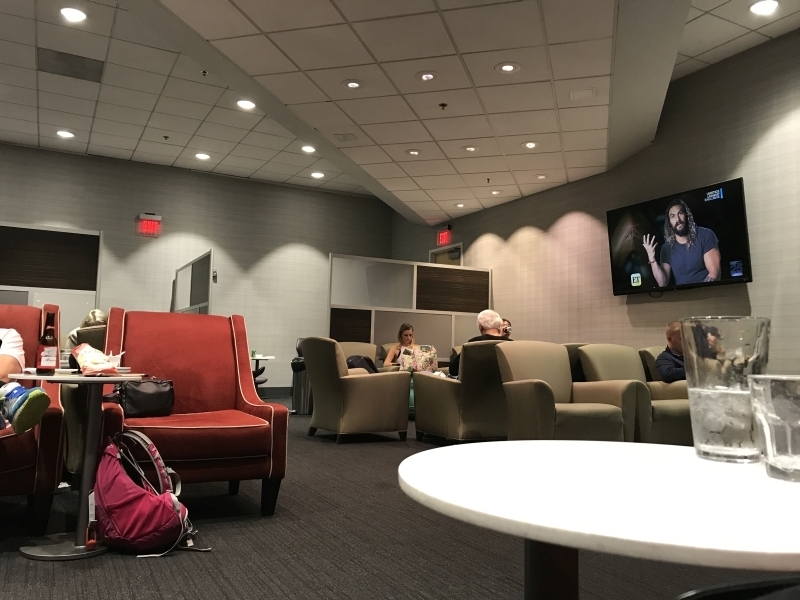 The food selection was underwhelming, given that we were about to board a short overnight flight where time spent eating would mean less time spent sleeping.  There were two different pasta salads, some green and black olives as well as some tomatoes and broccoli. 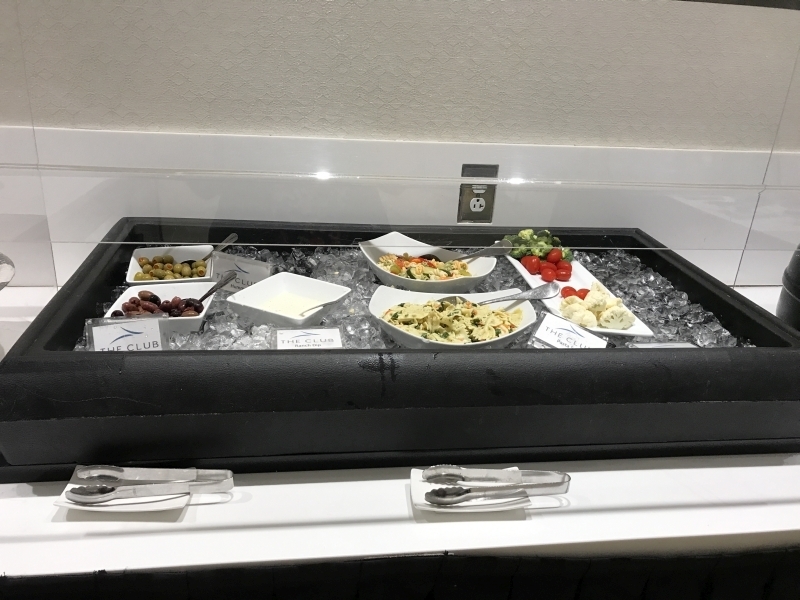 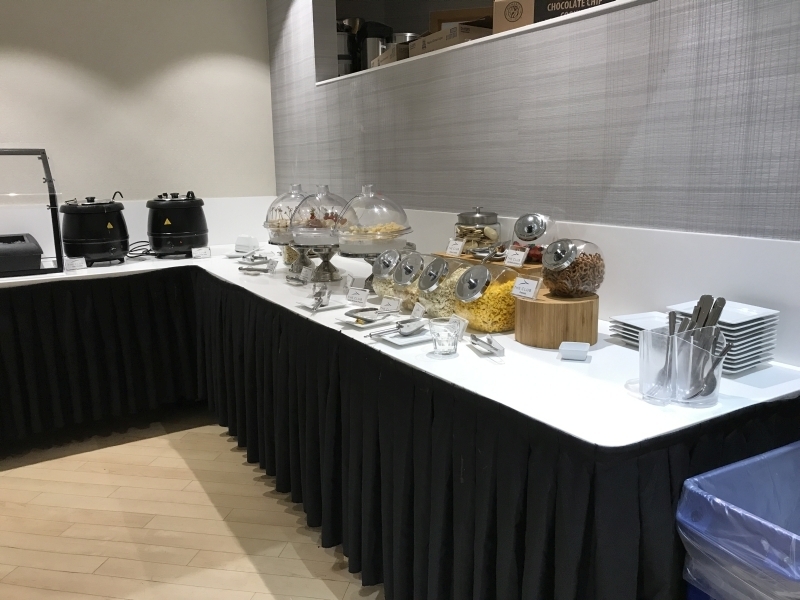 The coffee machine was towards the sitting area at the far back. It was too late for me for coffee which is why I gave it a miss. I also wouldn’t have known how to use it as there were various sachets next to the machine and the instructions were rather long. 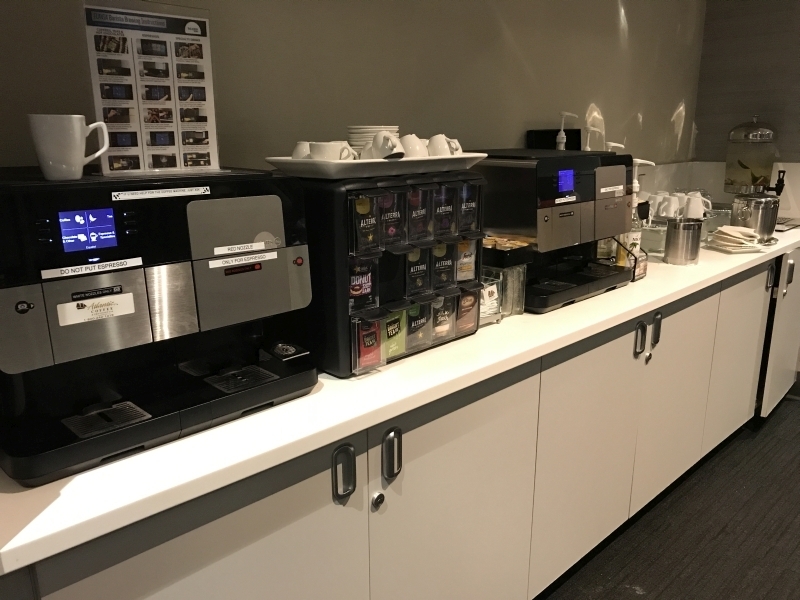 Staff were constantly walking through the lounge cleaning away used plates and glasses.  They also took my half-full glass away when I went to get some snacks and I was asked if I was finished when my plate was still full and I had a fork in my hand …….

I wasn’t too impressed by The Lounge.  A larger selection of food before an overnight flight would have been appreciated as you could skip the onboard dinner to go straight to bed.  The drinks were served in rather small glasses and as the lounge was very busy there was always a queue when I wanted to get a drink.

Perhaps I just got grumpy because I arrived at Logan three hours before my flight, which was far too early in retrospect.  If you decide to try the Aer Lingus business class service to Boston, I recommend an early dinner in the city and then a cab to the airport.