On Monday night, Rob and I were at the British Airways Christmas media drinks reception in central London.  Normally these events are just a good excuse to get boozy and catch up with the BA and our journalist colleagues.  Which it was ….

The BA PR team knew their audience, however, and saved a nugget of news for us which Alex Cruz announced in his short speech.

British Airways’ first Boeing 787-10, which will be outfitted with the new Club Suite, will launch to Atlanta in February.

If you are not familiar with Club Suite it is the new British Airways business class seat. This article explains Club Suite in detail including where you can fly it.

British Airways already flies the Boeing 787 in the form of the 787-8 (three class) and 787-9 (four class). The 787-10 is the longest version in terms of physical length, although not flying range, and was first introduced by Singapore Airlines in early 2018.

Technologically, the Boeing 787-10 shares all the benefits of the other two variants in BA’s fleet, including a lower cabin altitude, larger electronically dimming windows and energy efficiency.  The biggest difference, however, is that this will be the first Boeing 787 in BA’s fleet to feature the new business class Club Suite.

Currently, Club Suite is flying on the A350-1000 (review here) as well as some refurbished Boeing 777s.  Both of these aircraft have a wider cabin than the Boeing 787. To accommodate the Club Suite on the 787, the angle of the seats is adjusted, which means that seat and aisle width will remain consistent across the British Airways fleet. 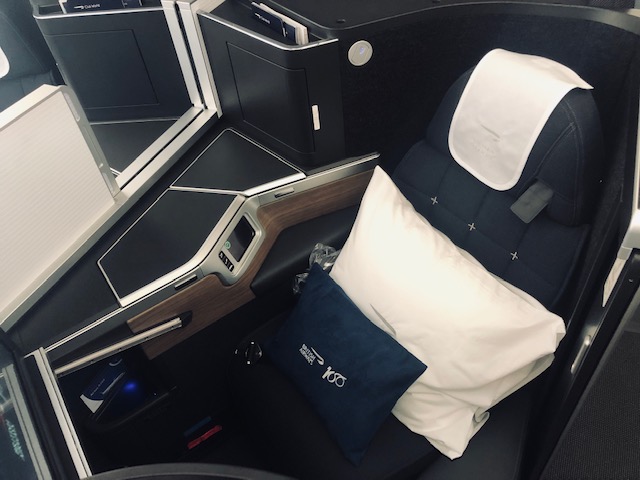 The British Airways 787-10 will also feature an 8-seat First Class cabin, using the existing First Class seat from the 787-9s.  The A350 does not currently feature a First cabin despite being a larger aircraft.

Club World is divided into two smaller cabins of seven and five rows respectively, as you can see in the seat map (click to enlarge):

It looks like there will only be three toilets across the Club World cabin. First gets a dedicated lavatory.

If you had asked me yesterday which route British Airways would put Club Suite on next, I would not have said Atlanta.

It is not – you are probably aware! – a particularly strong tourist market, although it does have the world-leading Georgia Aquarium which I must admit I have wanted to go to for a while.  There is also the World of Coca-Cola attraction …..

However, this could be British Airways throwing down the gauntlet at Virgin Atlantic and its partner Delta, which uses Atlanta as its main US hub. More than 75% of passengers transiting through the airport fly on Delta.  With no significant connection opportunities with partner American Airlines, British Airways might be doing some market testing as it goes up against Delta’s own well-received (and doored!) Delta One Suite.

The 787-10 will be replacing the existing 787-9 service to Atlanta, starting in February 2020 (the exact date is TBC as the aircraft will not arrive until January).  It will be on the following flights:

If you are booked on these flights after February, congratulations.  You just got upgraded to a significantly better business class seat!

British Airways is expecting a total of six Boeing 787-10s to be delivered in 2020, so stay tuned for more route announcements.

Are you waiting for your double tier points from BA Holidays? – and a reminder of how it works