This is our review of the Vietnam Airlines Lotus Lounge at Tan Son Nhat International Airport in Ho Chi Minh City.

It is the penultimate part to this series on Vietnam, with only the Vietnam Airlines business class review to follow (click here for that). You can read my earlier reviews of premium economy on Vietnam Airlines, the Hilton Hanoi Opera, a Halong Bay cruise, the MGallery by Sofitel Royal Hoi An and a review of the Sailing Club Resort Mui Ne.

As a reminder, Vietnam Airlines provided all flights and accommodation for me and my plus one whilst HFP paid for all its incidental expenses.

Finding the Lotus Lounge is very easy: it is almost directly above security and accessible via escalators. Click any photo to enlarge: 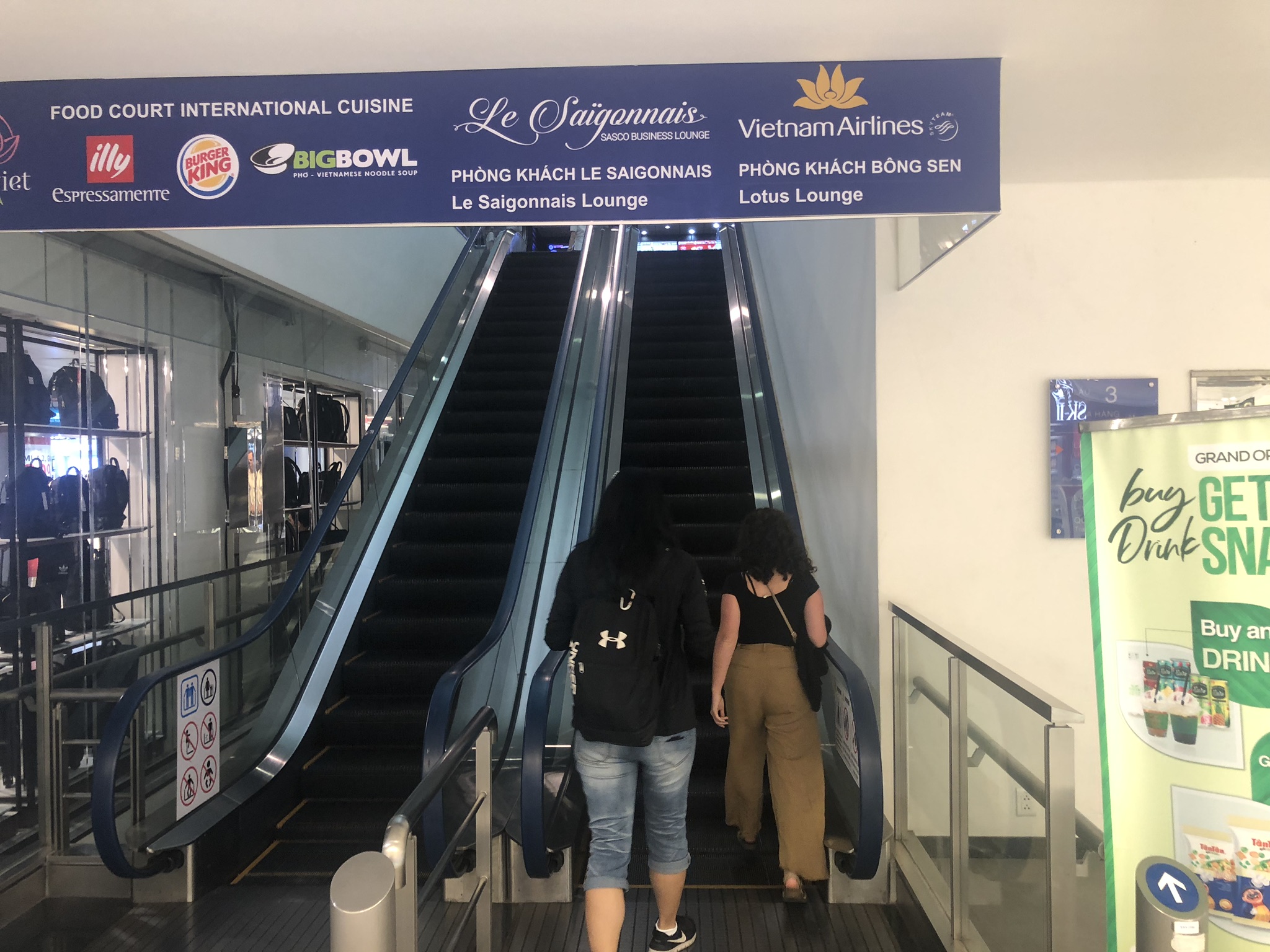 Here is the entrance: 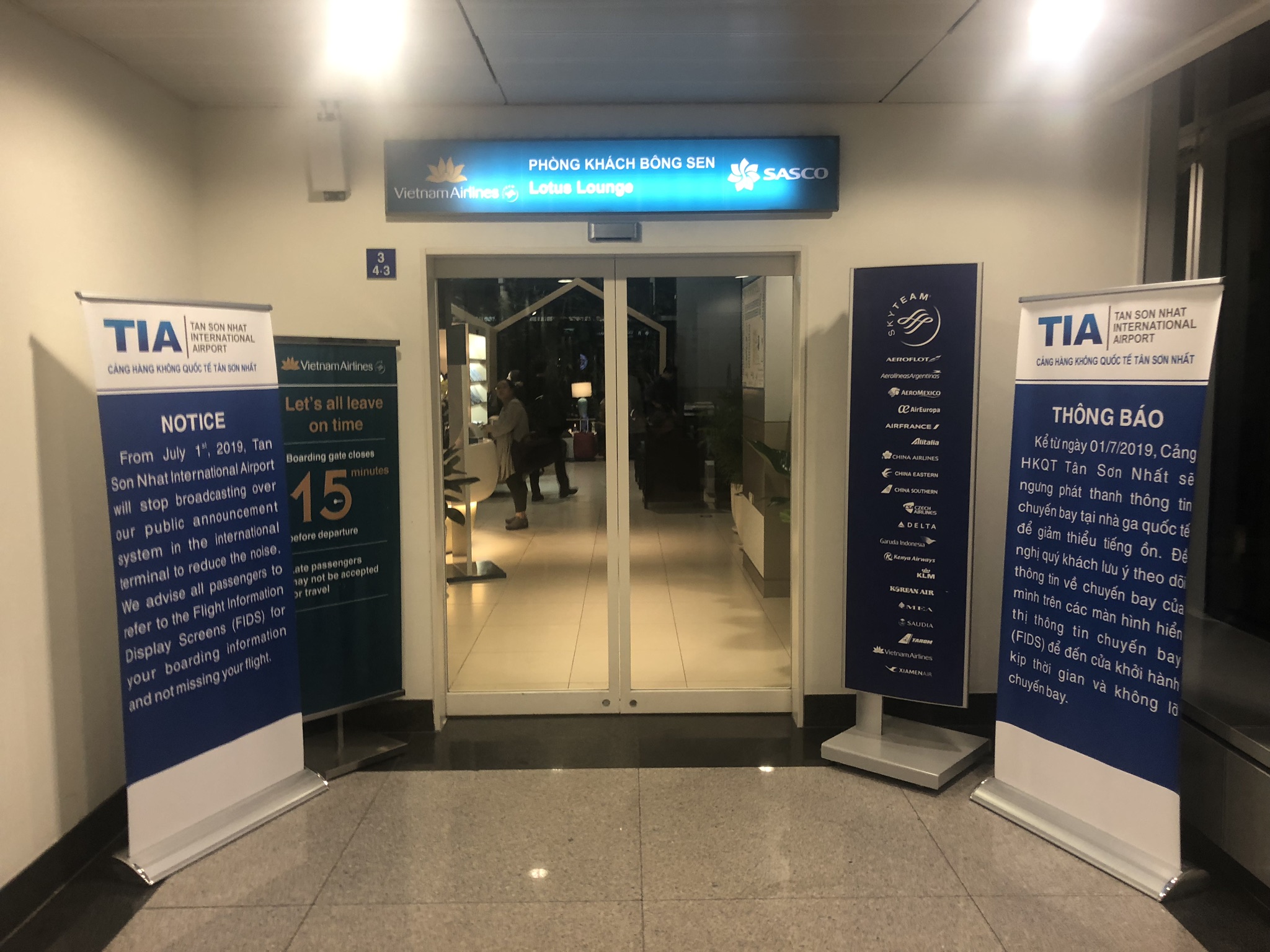 The Lotus Lounge is in a sort of L shape and stretches around a corner. My flight was at 00:45 so it was dark outside, but I can imagine it being wonderfully light during the day given the floor-to ceiling windows on two sides: 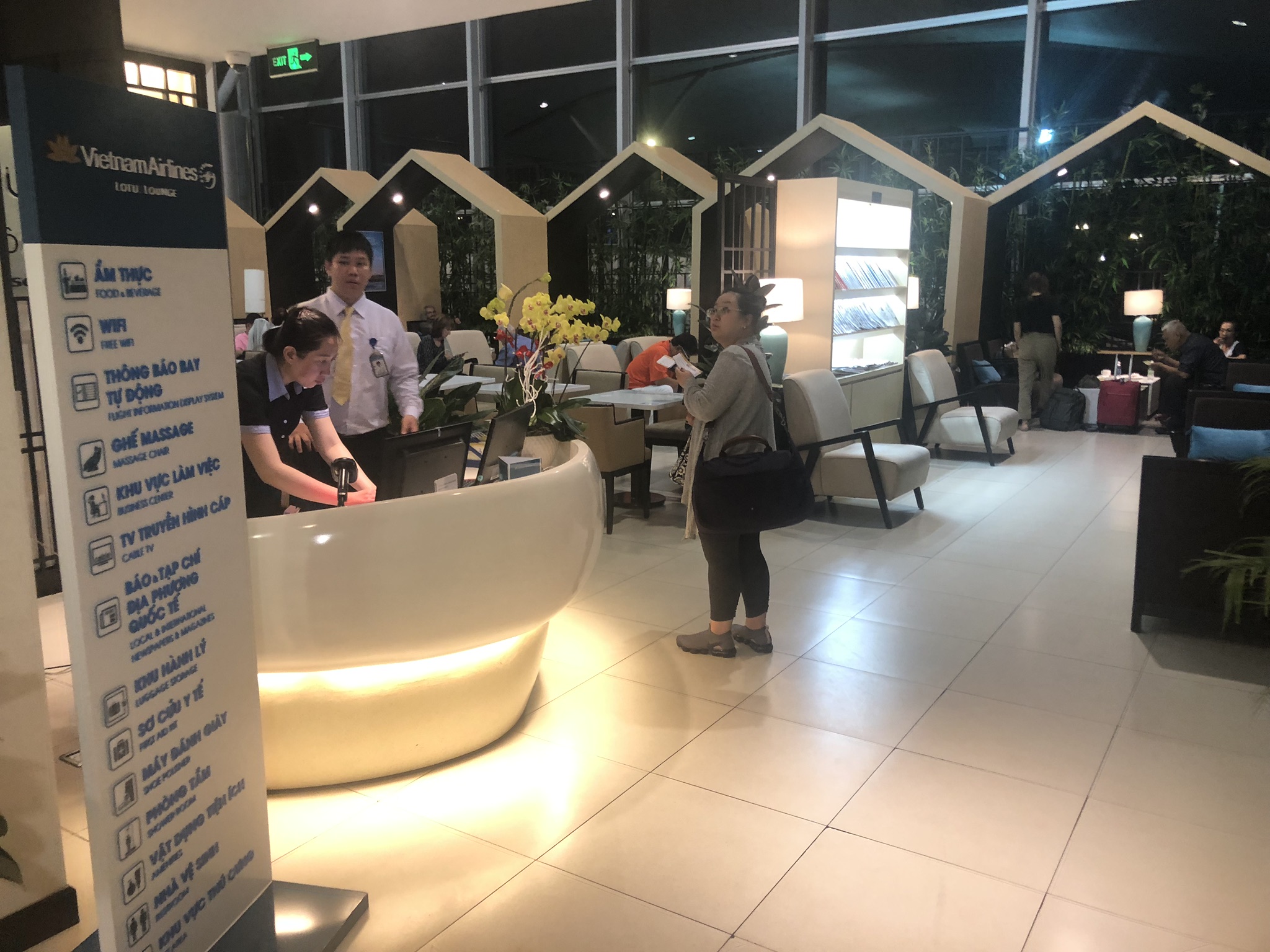 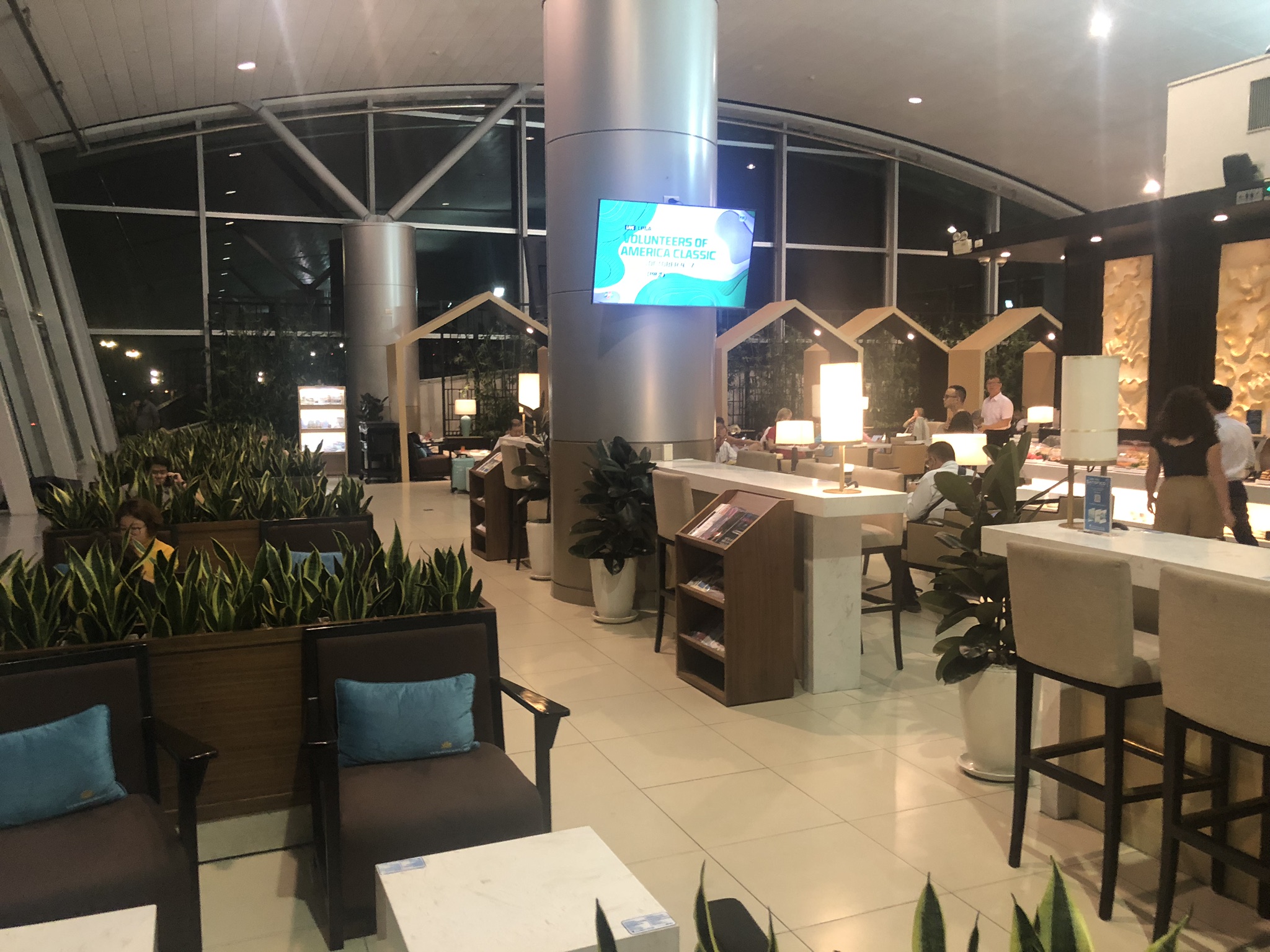 There is a range of seating, including tables, bar stools and these little private nooks: 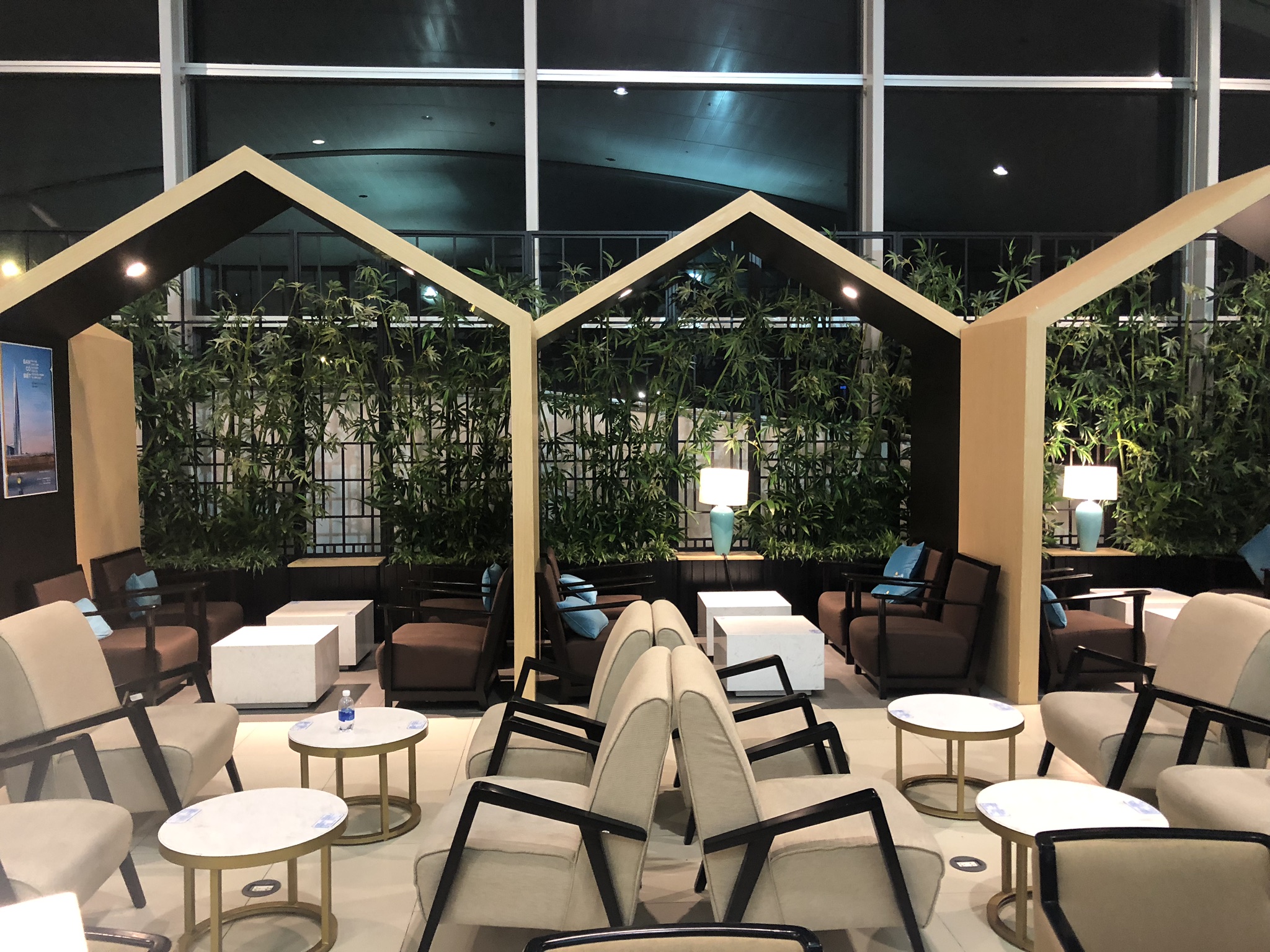 I took most of these photos after 11pm, when the lounge started emptying out. It reached peak business at around 9:30pm, when most tables and seats were occupied. By the time we left for the gate, at midnight, it was almost empty.

There is also a business centre with computers and a massage chair: 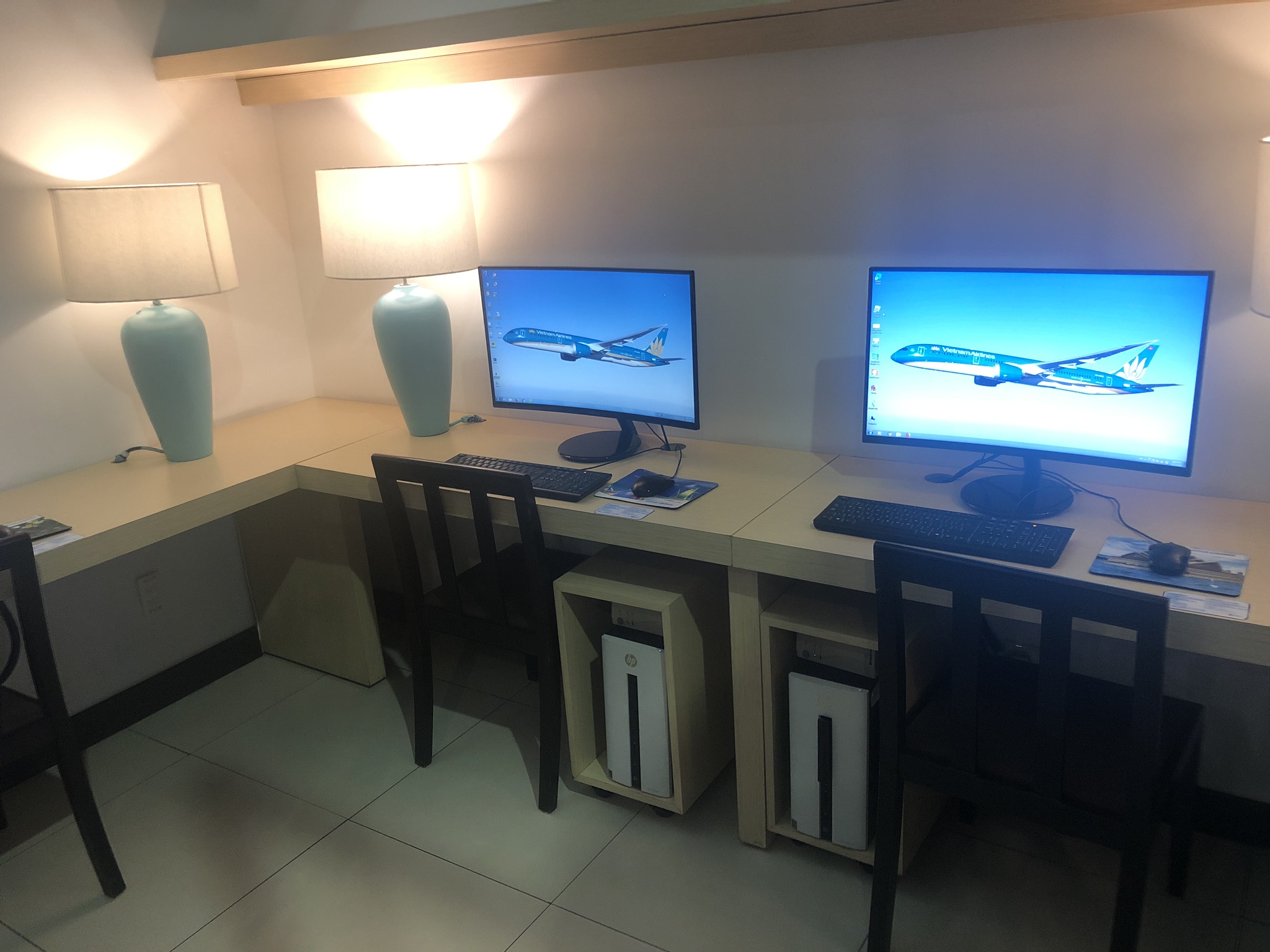 The toilets come with two showers as well, which can be booked.  They were empty during my visit, so there is unlikely to be a queue! 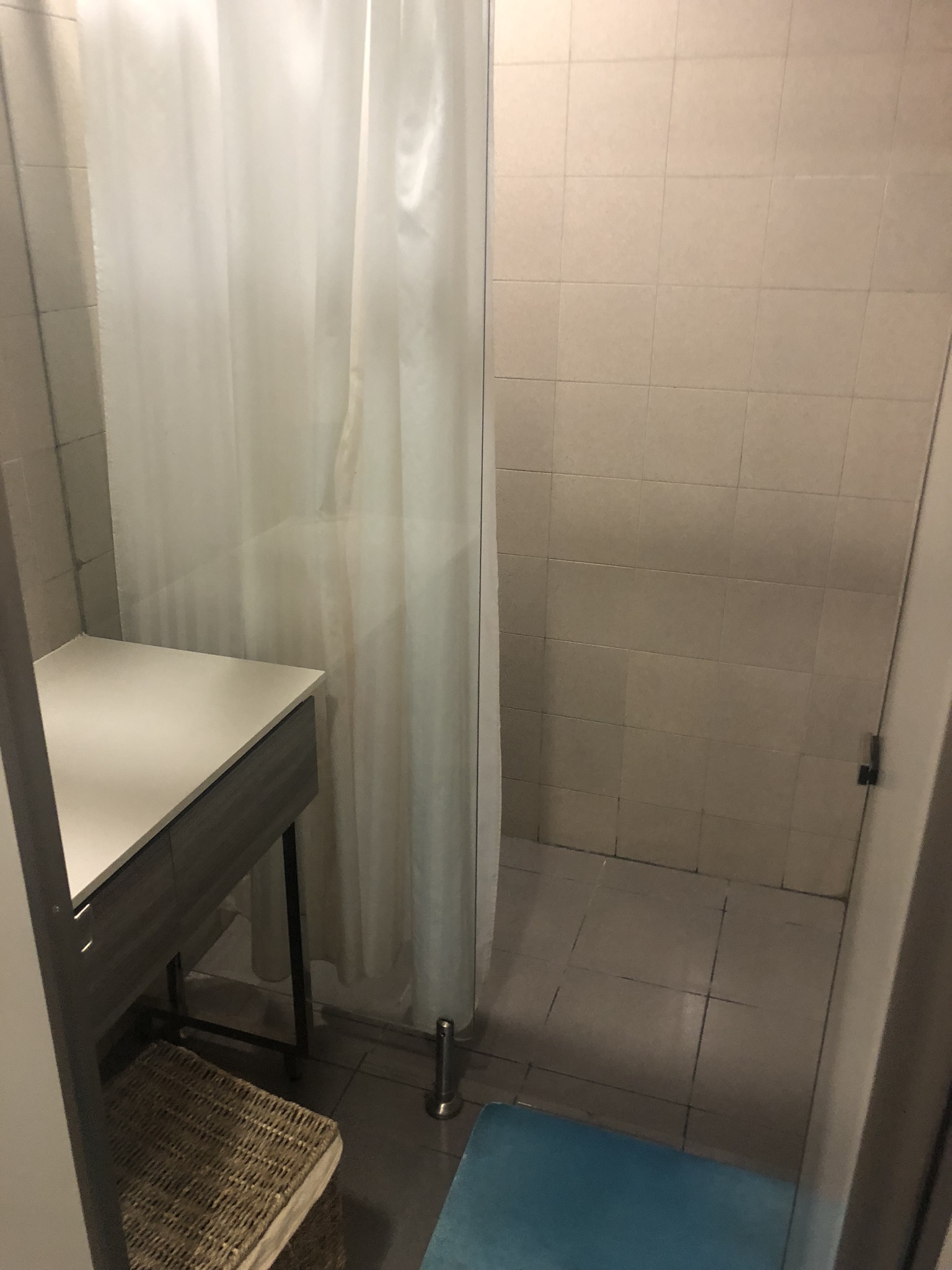 Towels, razors and all sorts of amenities are available upon request.

There were a range of drinks on offer, including a wide selection of juices (I had lychee) although the alcohol selection was a little sad looking ….. 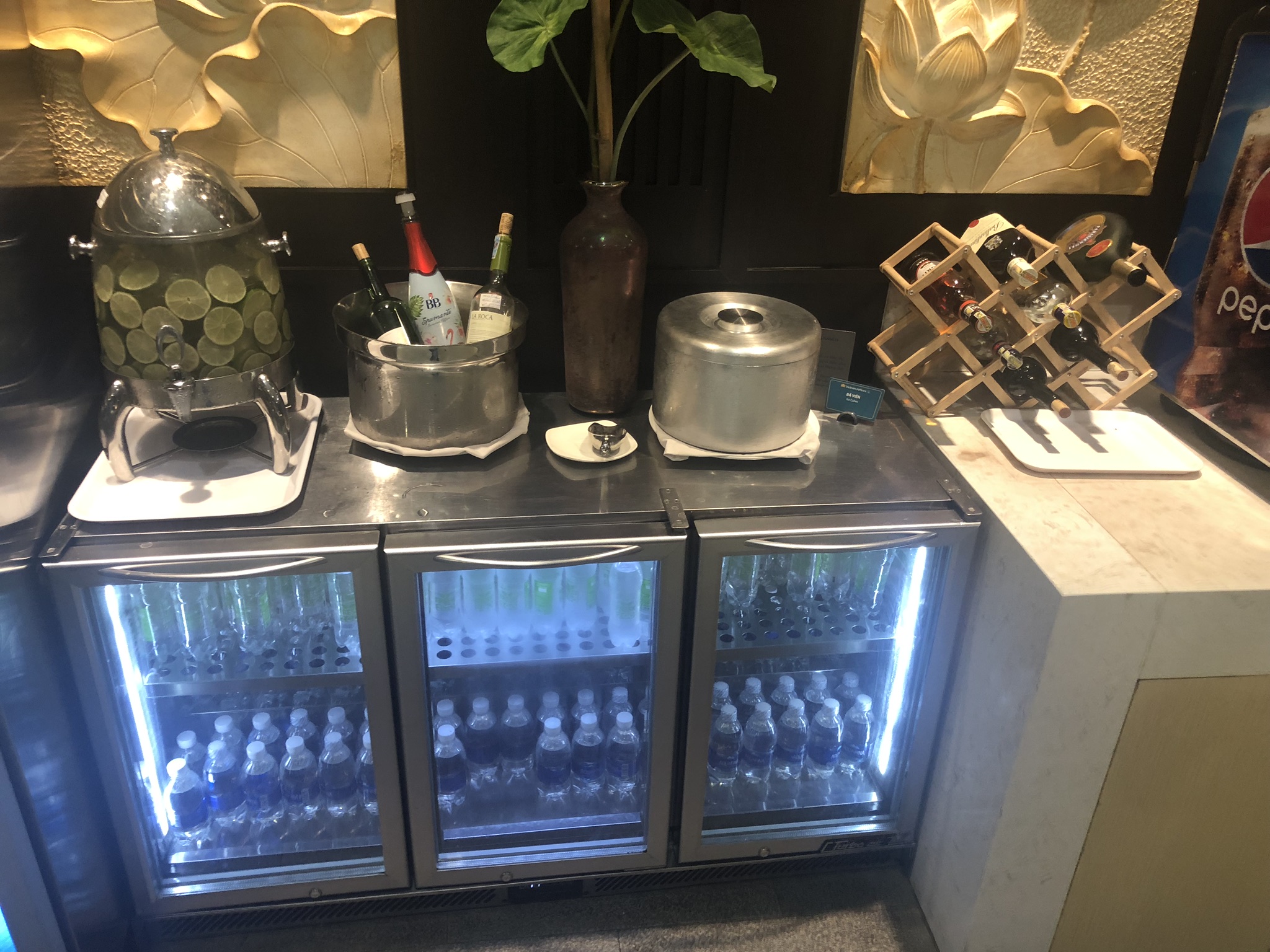 Then came the food, which was disappointing. There were a lot of rice and noodle heavy dishes which didn’t look particularly appealing. 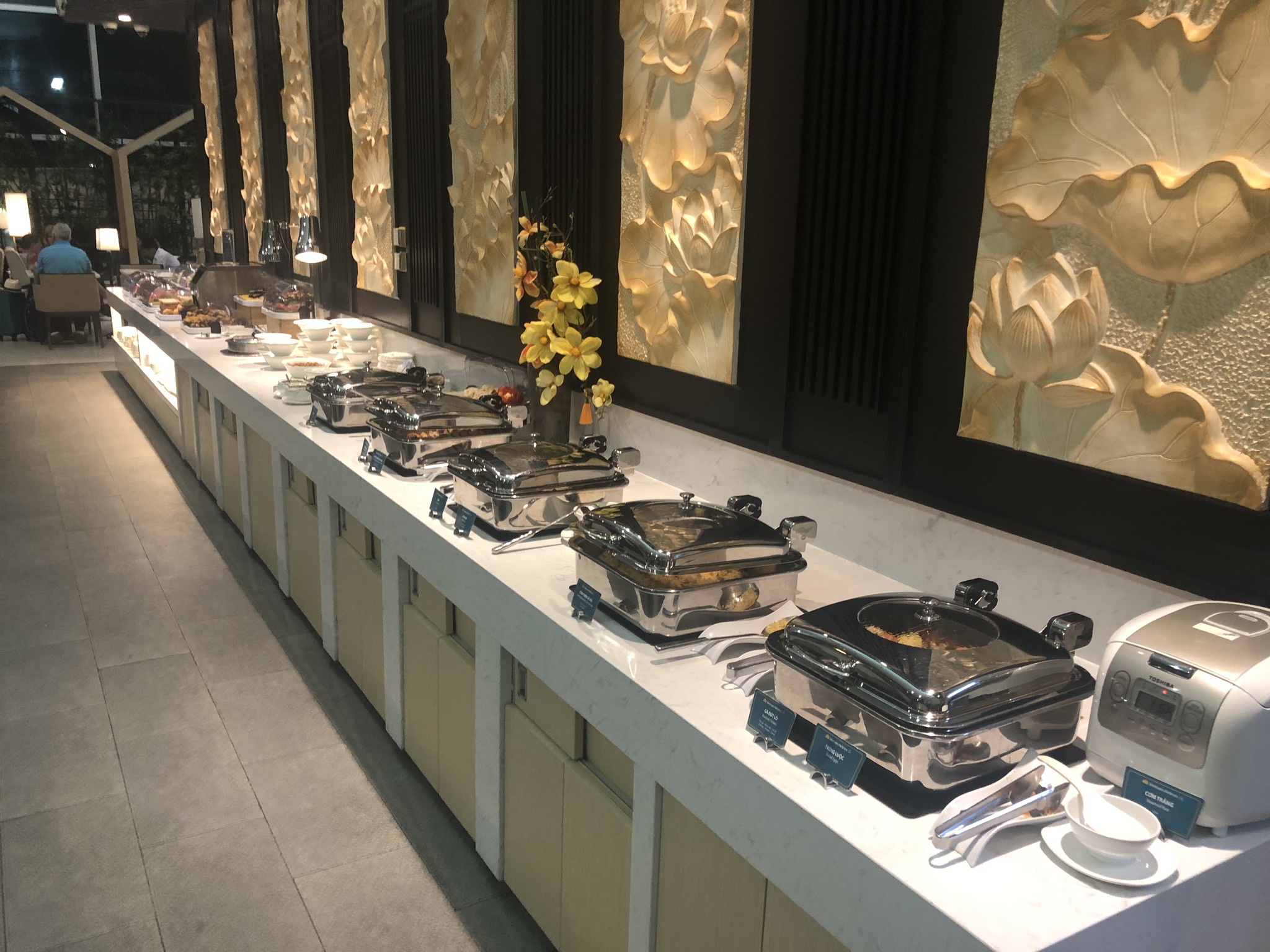 The highlight of the food offering is probably the pho, but even this came with some weird reconstituted pork balls rather than the traditional beef and chicken. 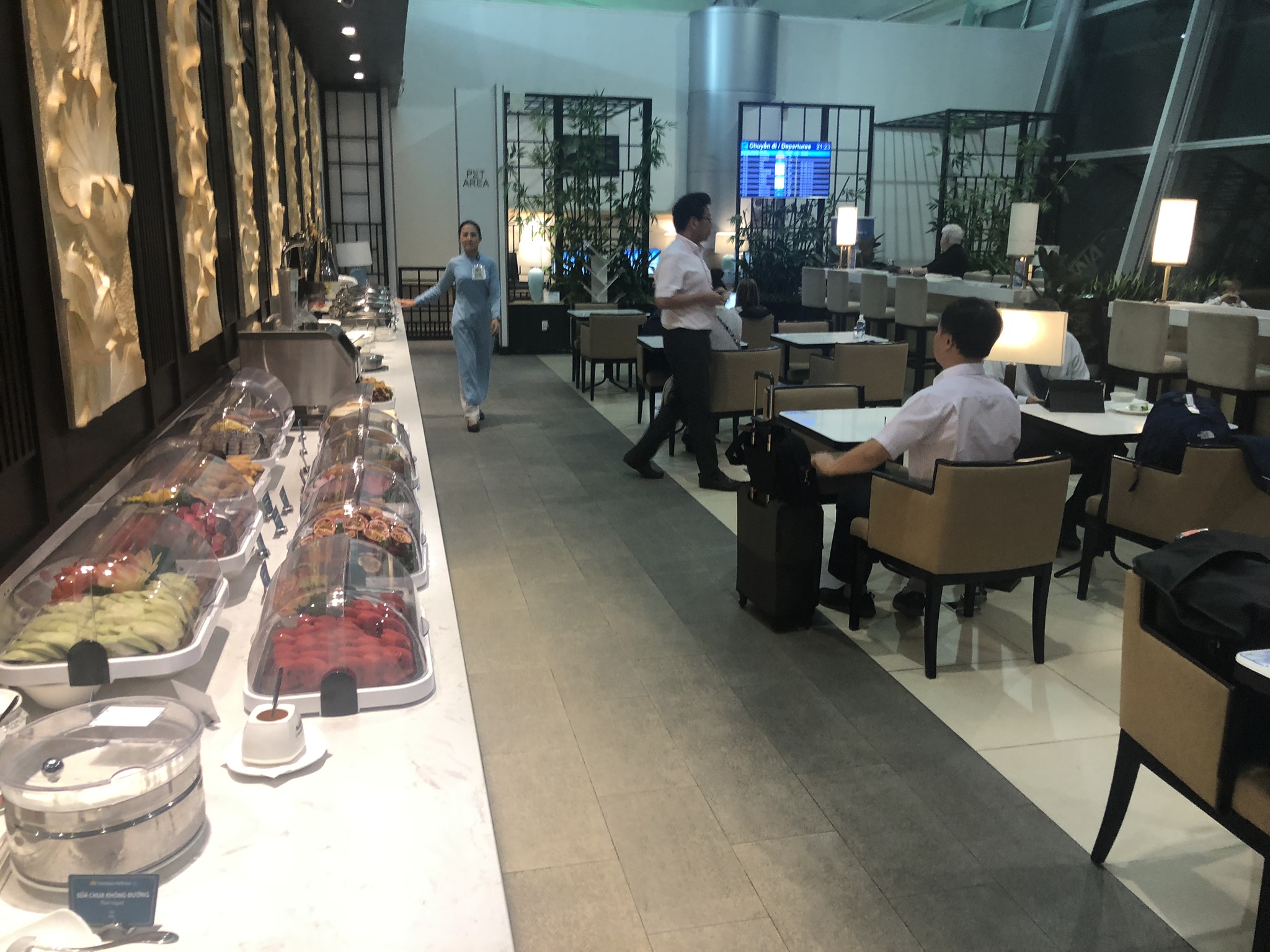 Take a look at this slightly creepy emoji coffee jelly!

Magazine stations are dotted around the lounge although none of these looked particularly compelling – no big name English language titles that I could see: 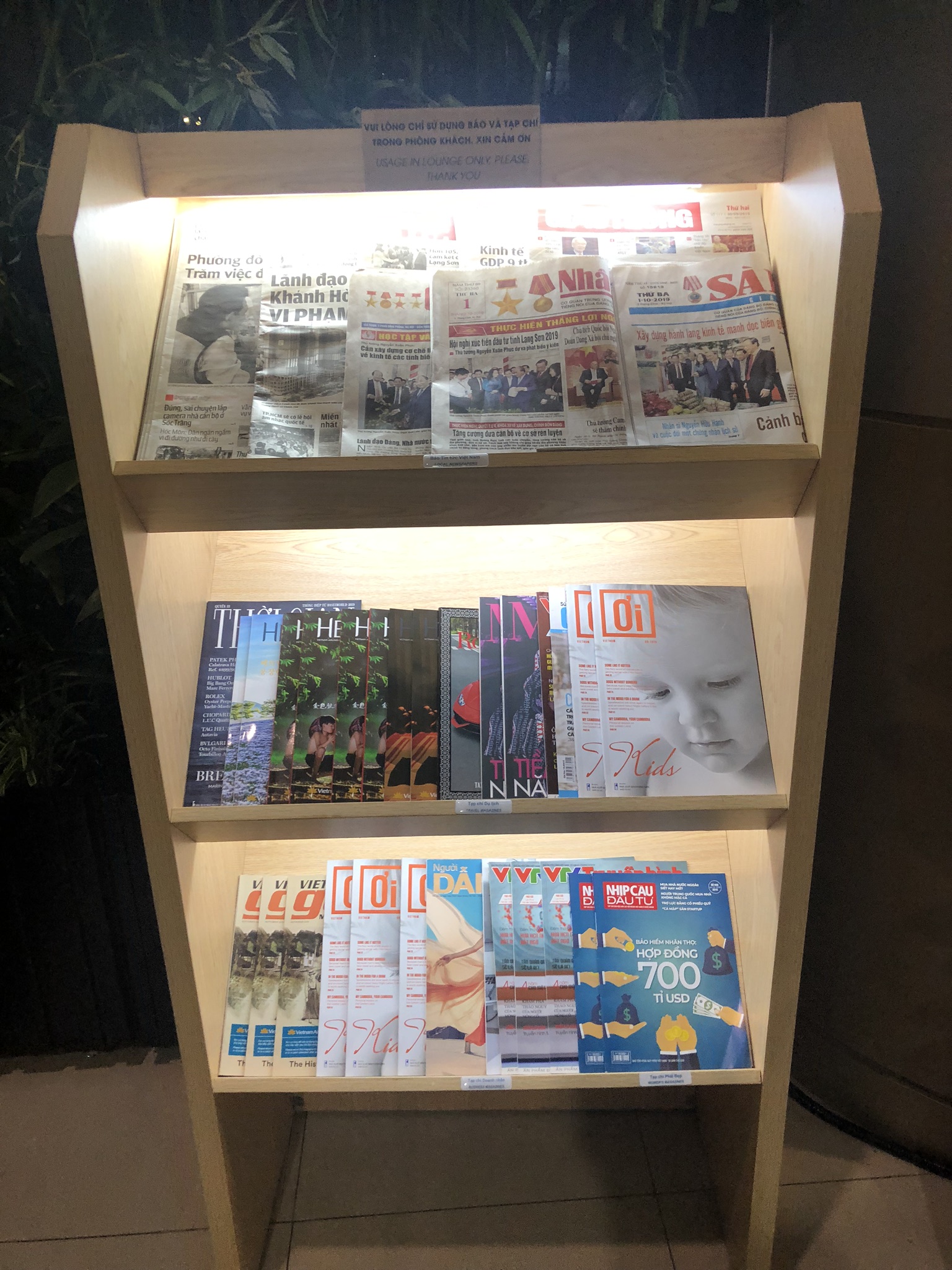 For a flagship airline lounge at a major airport I was surprised at how small the Lotus Lounge was. Despite this, however, it was never as busy as the British Airways Galleries lounges at Heathrow Terminal 5, and I was there during what I would assume is the busiest period for international departures.

The range of different seating areas can accommodate guests with different needs although there is little privacy.

Despite a disappointing spread of food and alcoholic drinks, the Lotus Lounge has decent amenities including showers, for which there was no queue. As a place to while away a few hours away from the crowds in the airport it gets the job done.

In the final part of this review, which will appear later this week, I look at Vietnam Airlines business class.