This is our review of South African Airways business class on the new A330-300 service between London and Johannesburg.

Even by our standards, early April was a little bit crazy travel-wise.

After having spent some time with my family over Easter, I stayed at the INNSIDE Hamburg for one night (reviewed here), flew to London, stayed at the incredibly dull Pullman London St Pancras the following night, woke up and took the inaugural Eurostar service to Amsterdam (reviewed here), spent the next night at the Kimpton De Witt in Amsterdam (review to follow), flew back to London and then three days later headed off to Johannesburg on board a South African Airways A330-300. 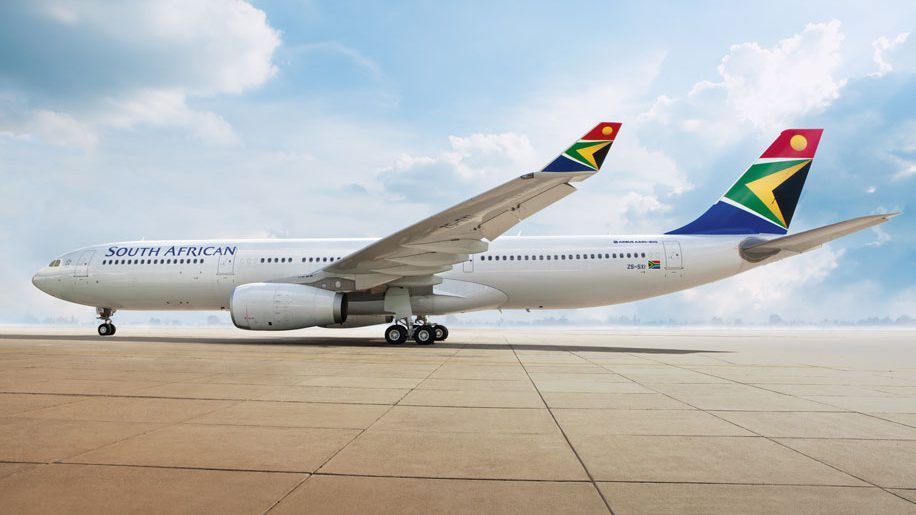 South African Airways had launched their new business class product on the A330-300 at the end of March.  We were invited on an organised press trip which didn’t work in terms of dates, which was a shame as it included a couple of nights at Sun City which Rob recommended.  SAA generously gave me a return ticket for a later date for a solo trip.

South African Airways has recently changed their flight schedule from two daily flights from London Heathrow to Johannesburg to one, with a new A330 brought onto the route.  The new flight leaves London at 7pm arriving in Johannesburg at 7am the next day. (The second slot has been leased by British Airways for 5 years).

I flew out Monday evening and arrived back on Friday morning which gave me 61 hours in Johannesburg – or rather at the InterContinental Sandton Towers (review to follow) and the two shopping centres next door.  HFP paid for its own hotel costs and other expenses.

South African Airways is part of Star Alliance which means they use Heathrow Terminal 2.

There was a dedicated line for Platinum and Premium check in so the process was very quick. Using the fast track security line I was airside within a few minutes.  I had more issues coming back but I will go into detail in my SAA Johannesburg lounge review which we will publish on Sunday. 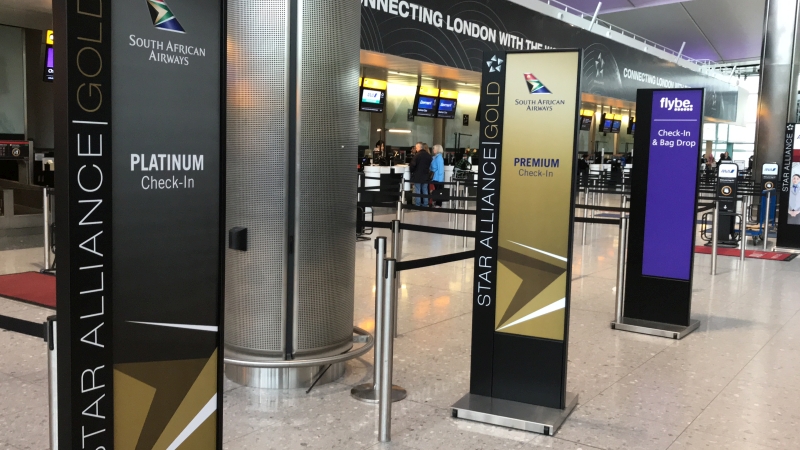 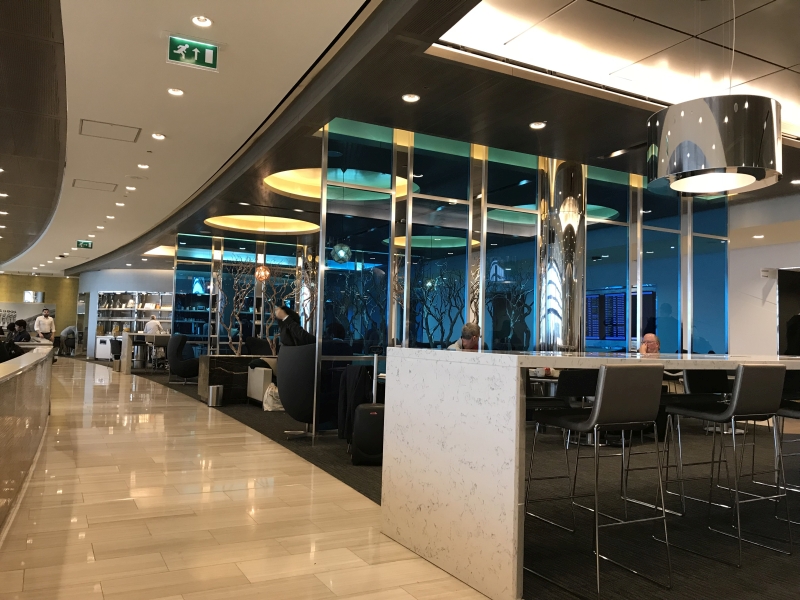 South African Airways new A330-300 has a total of 249 seats including 46 in business class.  There is no premium economy or First Class.  The 46 seats are split across two zones, with the second smaller section being in the middle of the plane right in front of the first economy row – with no cabin divider.   This means that the larger zone at the front of the aircraft is recommended.

All business seats have aisle access due to the staggered 1-2-1 configuration.  All seats are forward facing.

There is one toilet at the front and two in between the two business class sections as well as further toilets in the economy cabin. 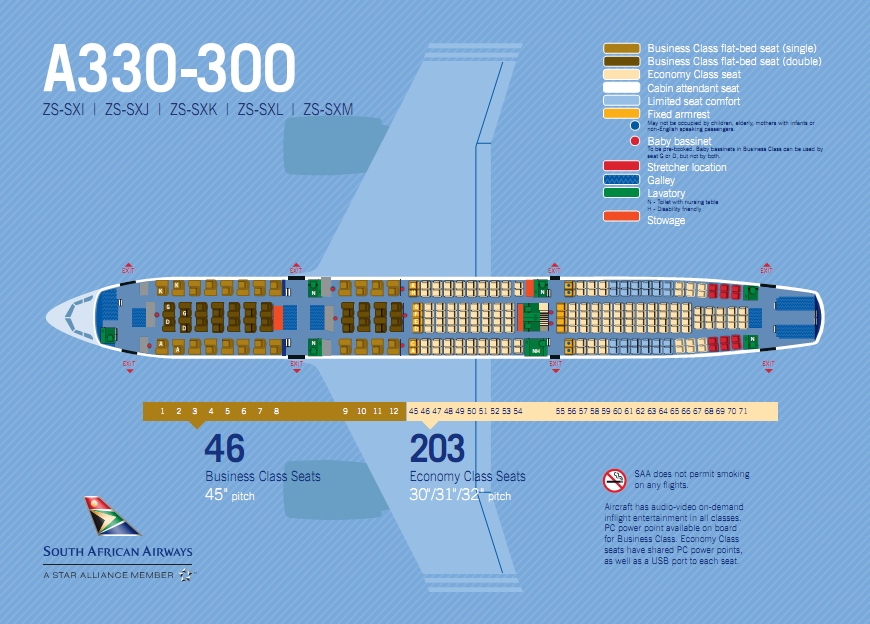 This is the front section of the business class cabin. 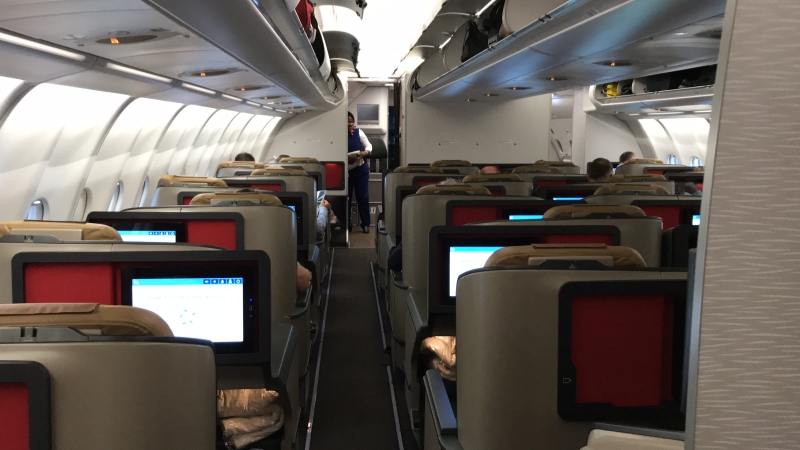 …… and this is the same section viewed from my seat.  As you can see, this 1-2-1 layout is a world away from the 2-4-2 layout used by British Airways in its Club World cabin. 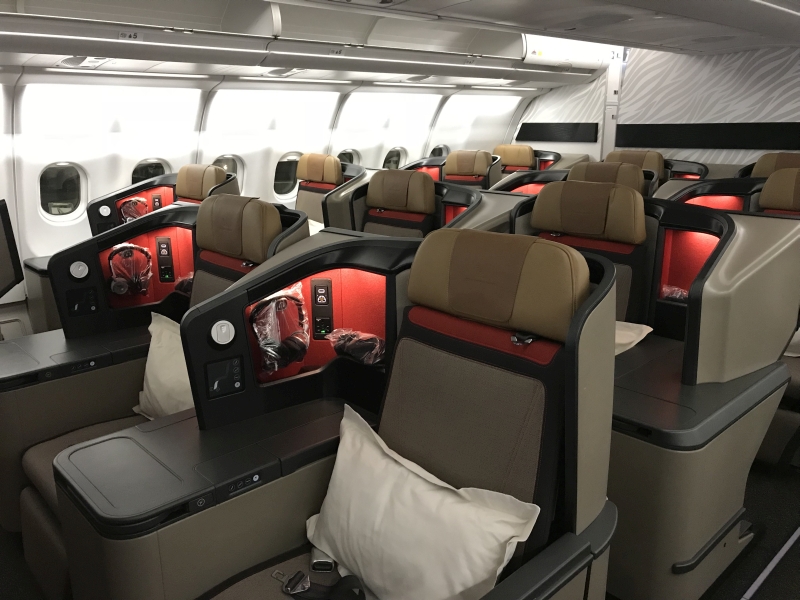 I loved the energy of the cabin crew members and thought it needed to be mentioned.

All flight attendants in the business cabin, especially on the outbound flight, were very bubbly, friendly and attentive.  You can’t always say that these days.

I was sat in 6A on the outbound and 4A on the inbound which were pretty much identical. 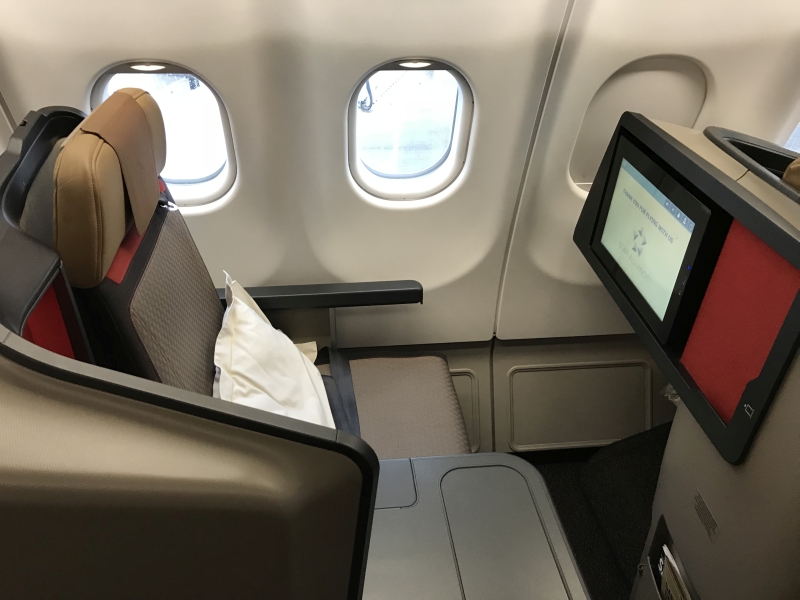 A blanket and a seat topper that you could put on top of the seat once it was fully flat, were stored underneath the seat in front of me.  This still allowed for a lot of leg room. 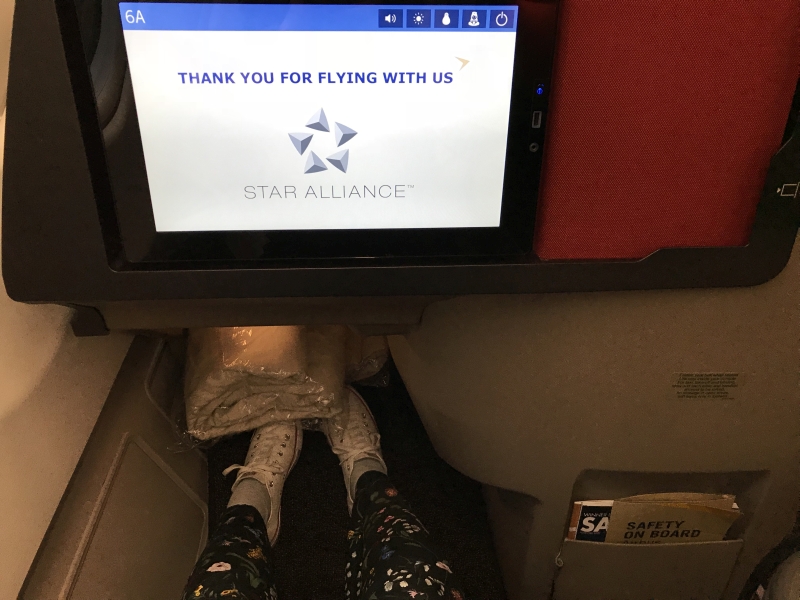 In fully flat mode the seat was almost 2m long and wide enough for me to not bump into the armrest when turning around. The blanket was not fluffy but large and warm. Unfortunately the seat was a little bit hard which made it uncomfortable to sleep on my side but it was perfectly fine when lying on my back.

The IFE screen was not tiltable which meant you couldn’t watch movies when lying down.  But perhaps I’m the only person that tries to do that …..

I had problems sleeping on the outbound flight. I’m starting to think that it’s due to the fact I’m tired when I get on board an overnight flight and then have to stay up to eat which fuels my body and makes it very difficult to drop off.  On the inbound, however, I did sleep for about 5 hours. 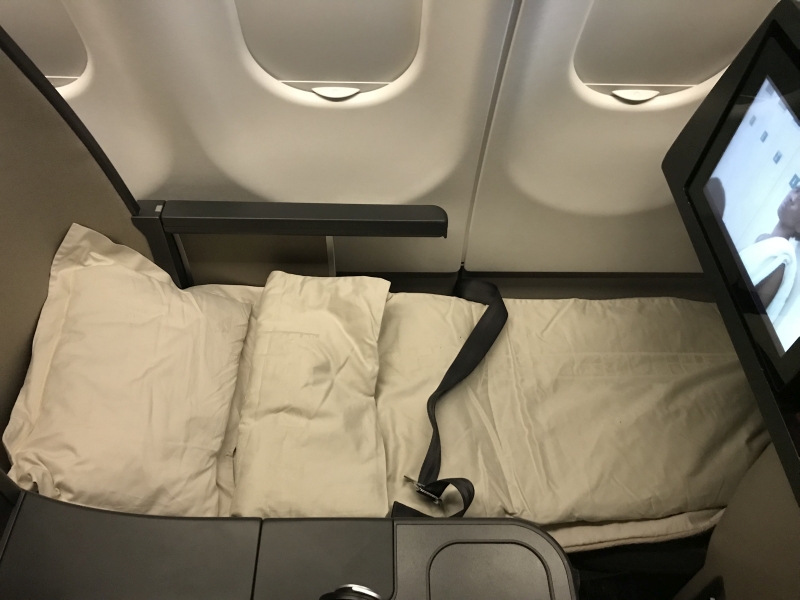 The seat didn’t have a lot of storage. The only area by the seat where you could put a couple of small items was a little shelf with a hook for the headphones. I was able to store my purse, phone and a bottle of water, the rest had to go in the overhead locker.  On an 11 hour flight a little bit more storage by the seat would have been great.

There was also a socket and USB port on the wall of the shelf as well as a reading light and the seat control panel. 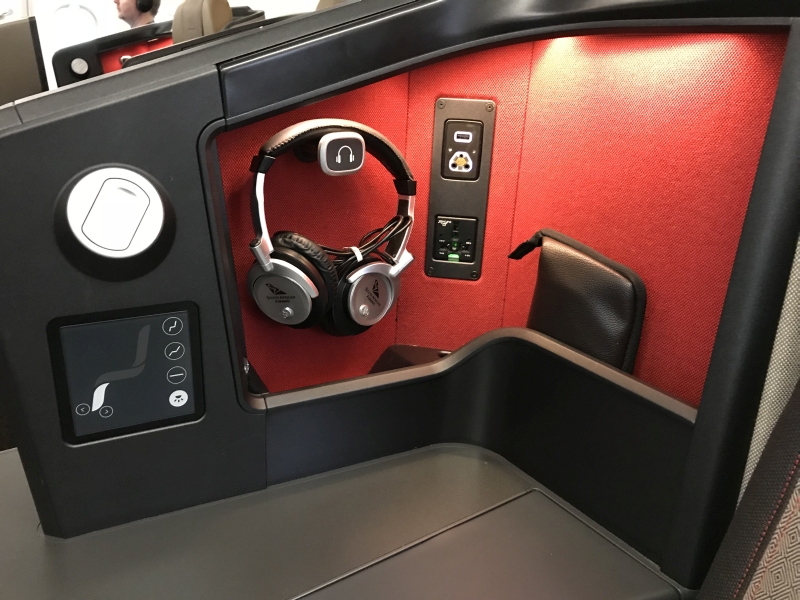 The remote for the IFE was hidden under a flap with a mirror but I only used the touchscreen. 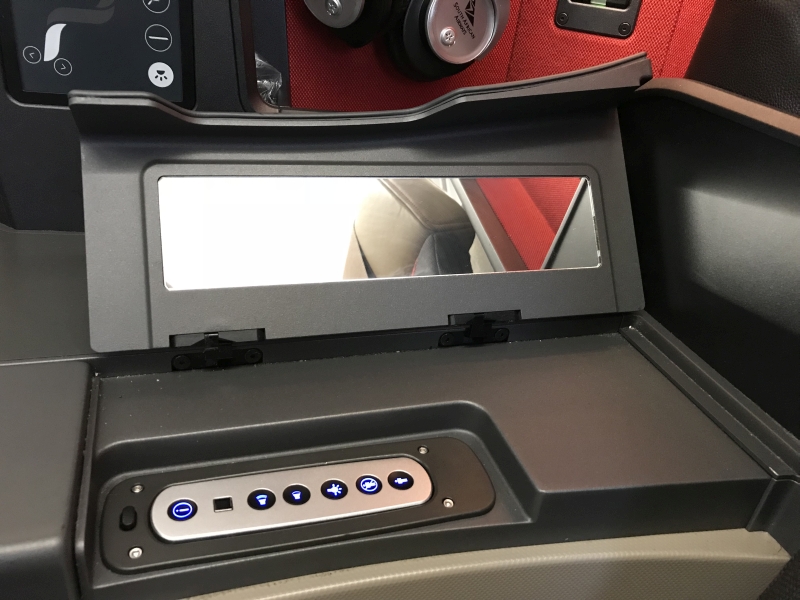 The seat had an additional shoulder seat belt which had to be worn during take off and landing. I don’t remember using such a belt on a plane before. 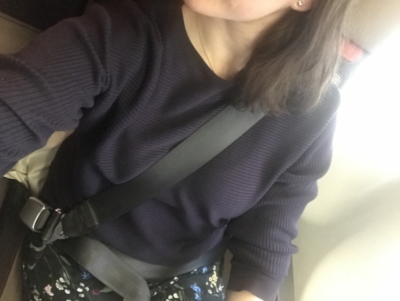 The IFE screen was 15” and had a good selection of new and classic movies (over 100) and TV shows. It was available from 10 minutes after the seat belt signs were switched off until about 10 minutes before landing.

I watched ‘The Greatest Showman’ to try to understand the hype – and it was indeed a fantastic movie. 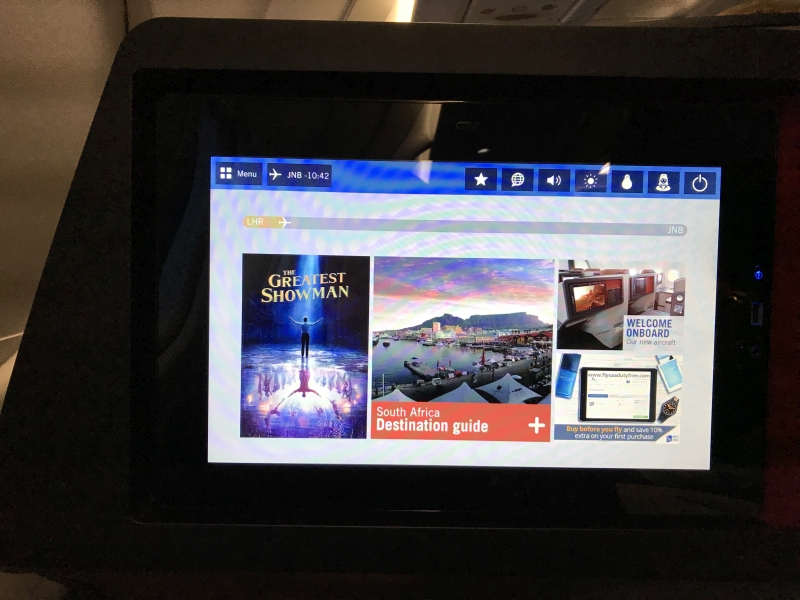 Interestingly there were two different wash bags on the outbound and inbound flight.  This was the wash bag on my outbound flight: 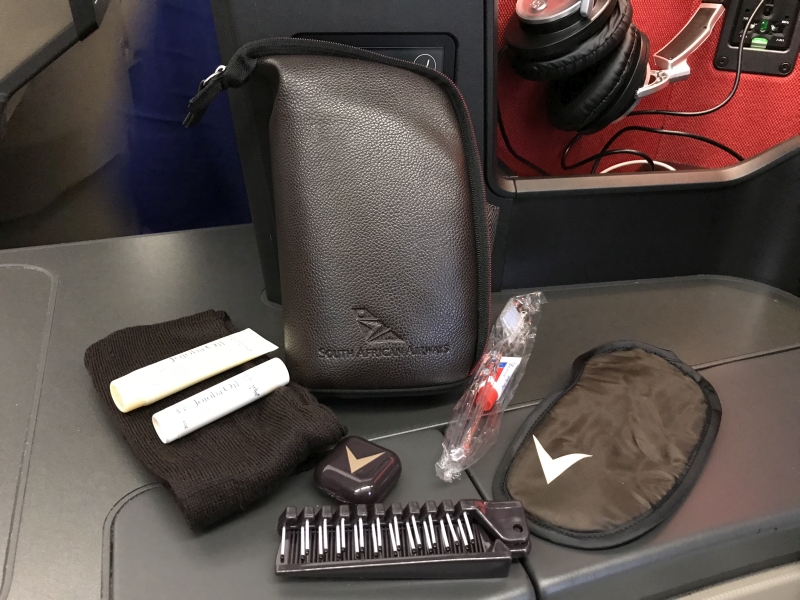 …. and this was the one on the inbound flight. 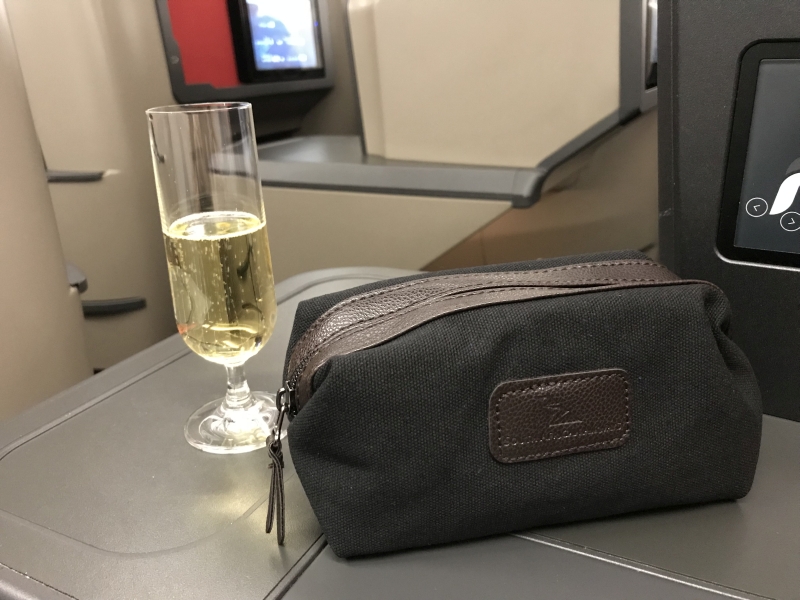 The contents were the same with a toothbrush, hairbrush, socks, sleeping mask, earplugs, face cream and lip balm.

Face cream and lip balm were by Crabtree & Evelyn and smelled lovely.  Unfortunately the sleeping mask and ear plugs weren’t great.  The sleeping mask was too tight, even after adjusting the velcro, and was pressing too firmly on my eyes. The ear plugs were a bit too big.  I really need to buy a proper sleeping mask as I’m yet to come across an airplane sleeping mask that actually works for me (I’m thinking of buying this one, please let me know if you know a better one.)

There was body lotion and room freshener in the toilets and paper as well as cotton towels. 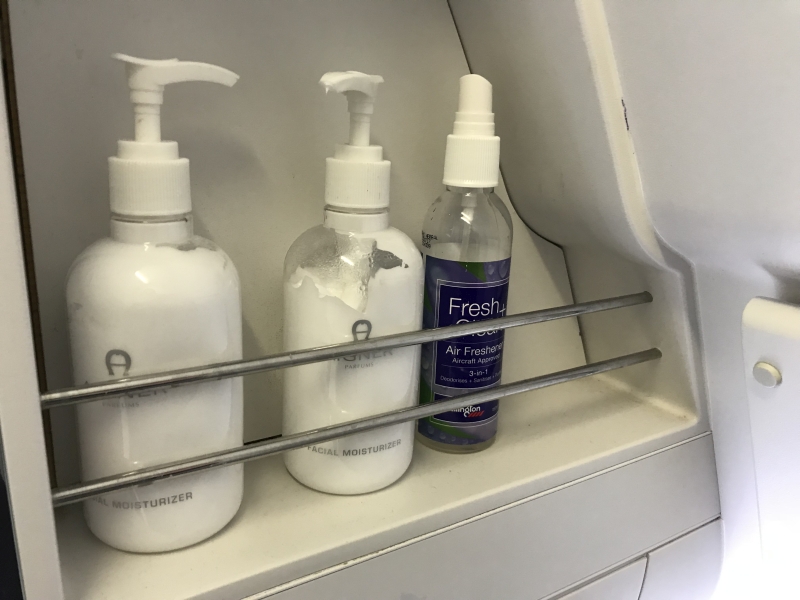 My SAA business class review concludes in Part 2 (click here) which covers the food and drink you’ll receive and includes a video.  I hope you’ve been able to see from the first half that South African has a high quality product which is well worth a look if you are heading to the region.