This is our review of World Traveller Plus (premium economy) on British Airways.

Premium Economy has not, historically, been a focus for Head for Points.  It isn’t a half-way house between Business and Economy, however much the marketing people may try to convince people otherwise.  A better slogan might be ‘Economy how it used to be, not how it is now’.

We don’t completely ignore it, however.  Earlier this year I reviewed Air New Zealand premium economy.  We have covered Norwegian Premium twice, once here with Anika and once here with myself, and for the money we rate it highly.  I also reviewed Vietnam Airlines premium economy here as part of my trip this Summer. 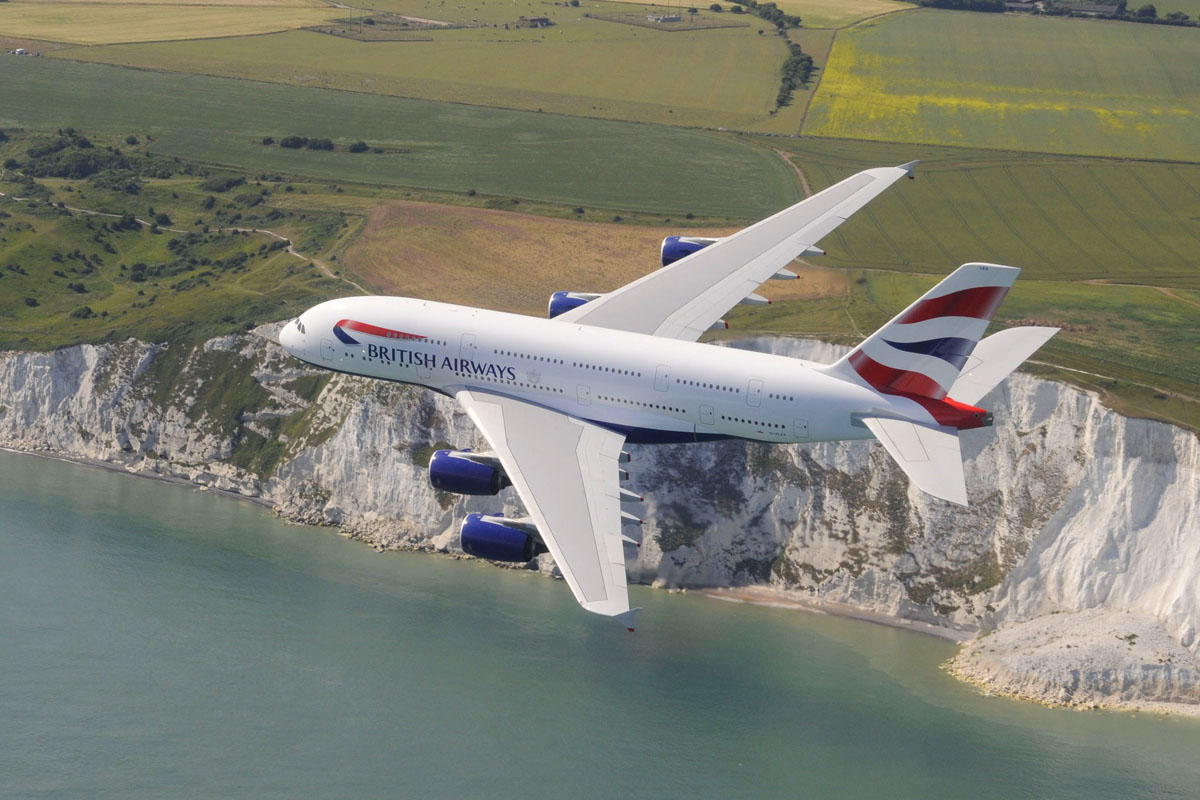 With British Airways having recently made some improvements to World Traveller Plus, we decided to give it a proper review for the first time.  We will try to do a similar Virgin Atlantic piece over the next few months.

British Airways offered HfP a free WTP ticket for review purposes.  As I was planning a holiday anyway, I tied it in with a trip to Washington Dulles.  Having studied abroad for a year in the Baltimore-Washington area it was high time I made my way back that way to see everyone I knew.

You can find out more about World Traveller Plus on this page of ba.com.

British Airways flies twice daily to Washington Dulles.  In the winter season one of the daily flights is on an A380, although you will often find a range of aircraft on this route year round, including Boeing 777s and 747s as well as 787s.

Unlike many other carriers at Heathrow including Virgin Atlantic, British Airways does not have a separate World Traveller Plus check-in / bag drop desk.  Given the number of desks at Terminal 5, this is a weird omission – it wouldn’t add any marginal cost (there are enough WTP passengers each day to keep it busy) and it would improve the passenger experience as well as encouraging passengers to trade up.

You must queue with other economy passengers (click any photo to enlarge): 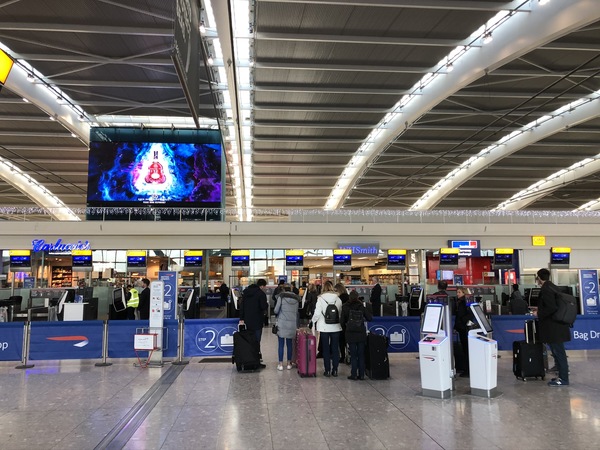 In practise, however, I have never found the queues at Heathrow T5 to be particularly bad. It is more of a problem at other airports where BA is slightly more space constrained.

Given that British Airways charges £120 return to add a second suitcase to an Economy ticket, anyone with a lot of luggage should seriously consider booking World Traveller Plus instead.  Given the extra Avios you earn as well – as I discuss below – it may end up cheaper.

Like virtually all premium economy offerings, BA does not include lounge access so you will have to entertain yourself in the perpetually crowded T5 concourse.  (Norwegian used to offer lounge access on Premium tickets but has now dropped it unless you have a flexible ticket.)

However, as I was on an A380 I knew that I would be departing from T5C.  I made my way there early using the secret corridor.  One side of the air train is currently undergoing engineering works and there is a less frequent (and more crowded!) service.

World Traveller Plus is on the upper deck of BA’s A380s, tucked behind a smallish Club World. It is, all things considered, a fairly small cabin given the size of the aircraft. 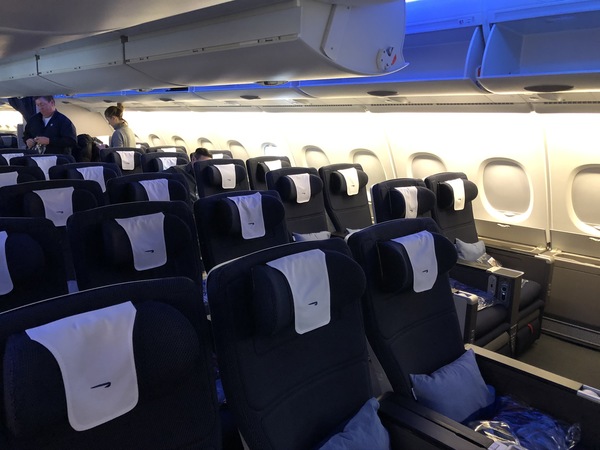 Seats are arranged in a 2-3-2 config. One of the benefits of being on the upper deck is having the large sidewall storage bins next to the window seats, which are great for stowing things you want to use during the flight. 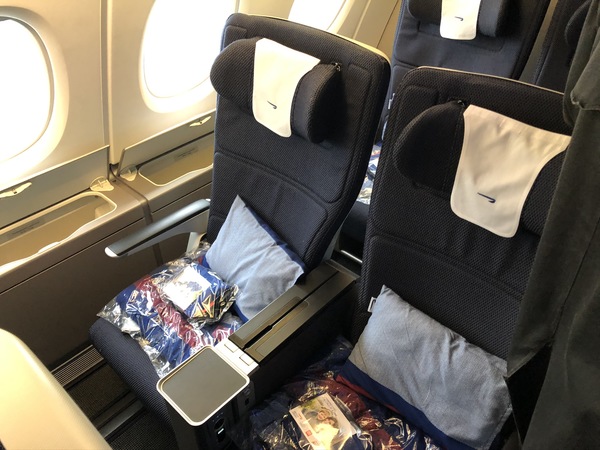 The seats are a decent width and have good recline. Whilst Norwegian’s premium economy touts the greatest seat pitch, I did not notice any great differences between Norwegian, British Airways or even Vietnam Airlines (links to reviews). I had ample leg and knee room in World Traveller Plus and was able to extend my legs fully under the seat in front. 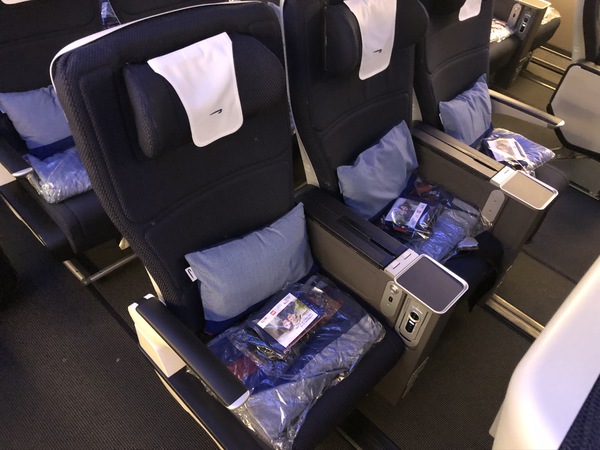 Screens are in the seat back in front of you whilst tray tables are in the armrest. There is also a small cabled remote control for the IFE. If you are sitting behind another World Traveller Plus row you get an adjustable leg rest. There are no personal air vents overhead.

Unlike in some premium cabins, BA has chosen to retain overhead bins throughout the cabin so there is plenty of storage.  On the upper deck of an A380 the window-side bins are smaller than average, although this is not a problem since you can place large items in the central bins. 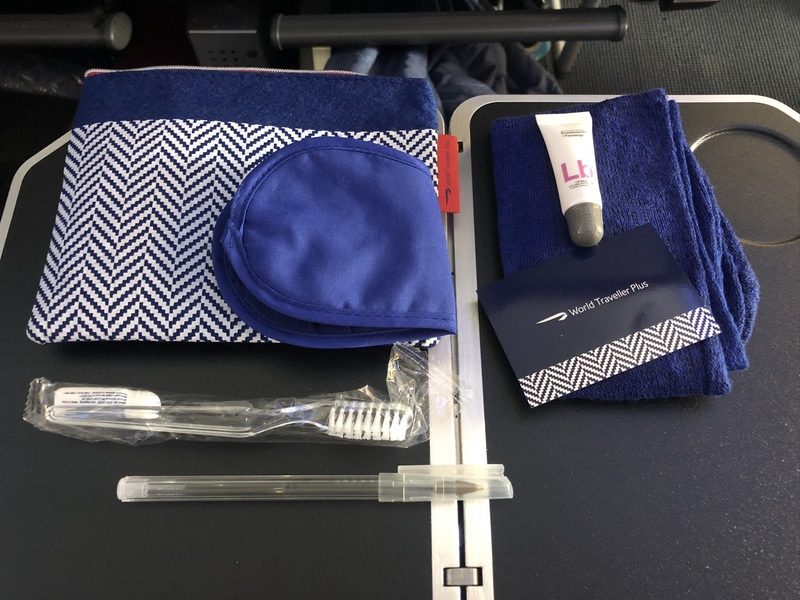 The only thing that is missing is a pair of earplugs, which I had to ask cabin crew for separately.

After boarding I was offered a choice of water or sparkling wine as well as a menu. 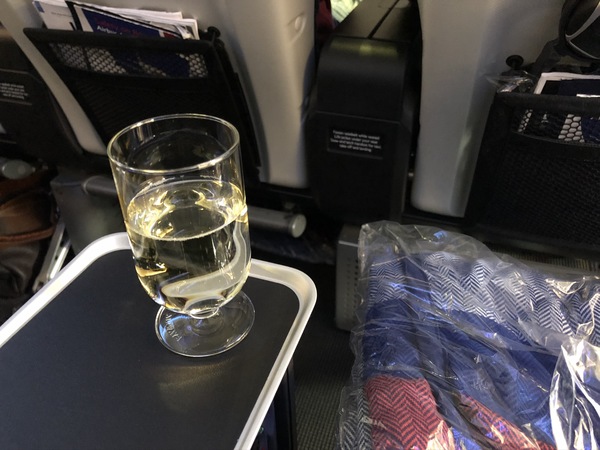 Once airborne, cabin crew came round offering everyone a hot towel before coming round with small pack of pretzel and taking drinks orders. I had some white wine as well as some water. You are served two mini bottles, I assume to save time during the meal service. 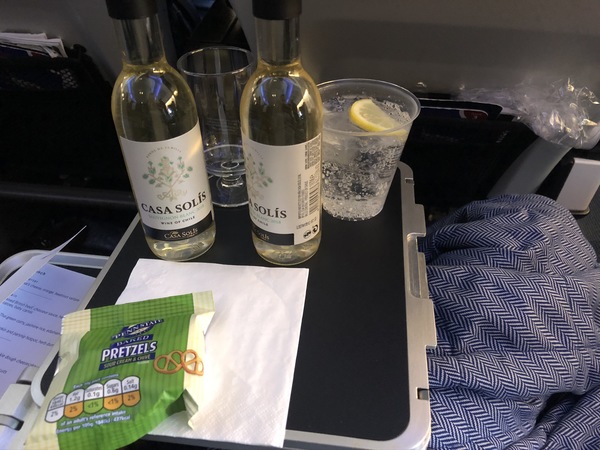 About an hour later the main meal is served. Starter, main course and dessert are all served on one tray: 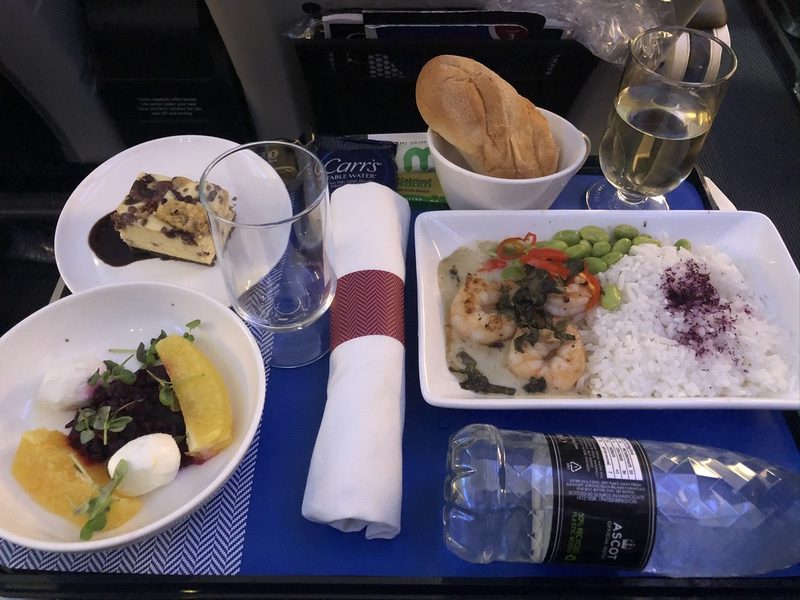 I had the Prawn Thai green curry, jasmine rice and edemame beans which came with a goat’s cheese, orange and beetroot tartare starter and a chocolate and pecan cookie dough cheesecake, as well as some cheddar and crackers.

I’m always pleased when airlines hand out proper bottles of water, too, so that’s a bonus.

After dinner there is also a tea and coffee service, as well as ice cream mid-flight.

British Airways had its first A380 delivered in 2013, so the in flight entertainment is not as new as you will find on its A350s and refurbished Boeing 777s.

The seat back entertainment screen is a decent size, although I don’t think it uses multi-touch technology and sometimes requires more of a firm press.

Underneath the screen are two USB plugs: 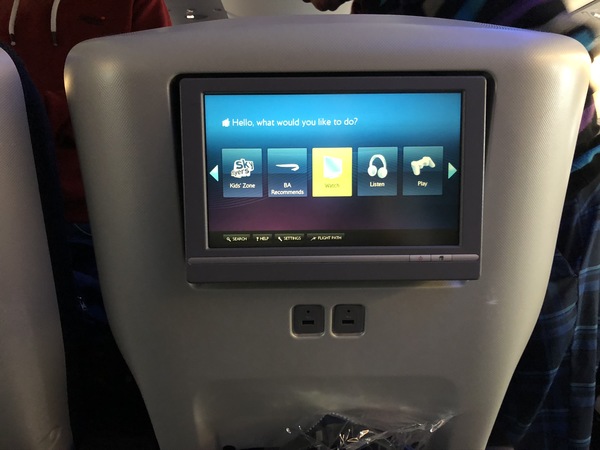 On the armrest you will find the headphone jack and remote control.

British Airways has a good selection of entertainment options. There were several pages worth of new releases covering a wide range of tastes from superhero blockbusters to Disney, biopics and smaller films. This is in addition to the ‘classics’ and ‘best of British’ categories etc. I ended up watching the new Spiderman film, the Apollo 11 documentary and All is True, Kenneth Branagh’s film about Shakespeare’s life. 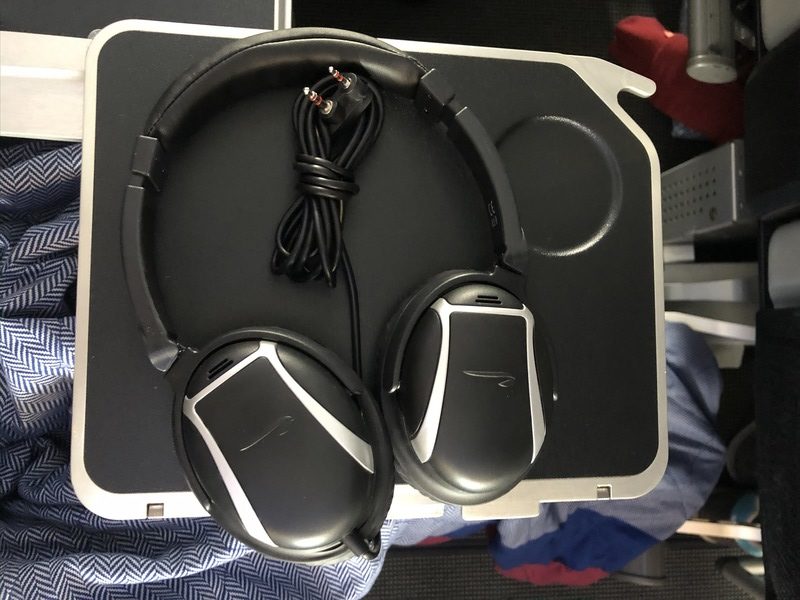 Headphones are over the ear style, although I don’t think they are noise cancelling. They were certainly decent although nothing to shout home about.

British Airways’ A380s are fitted with Wi-Fi. Unlike on the A350, packages are available based on time rather than consumption, which is a fairer way to go. This was what was available – I’m not sure if the ‘full flight’ prices is higher on longer routes:

I went for the 1 hour option to test it out and was surprised by how well it did. I wasn’t streaming video but enjoyed full normal usage of my phone for that hour, without having to worry about page loading speeds or waiting for images to load on social media.

Around an hour before landing cabin crew come round again with the second meal choice. On a shortish transatlantic flight this is a hot slice of pizza in a box or some sandwiches: 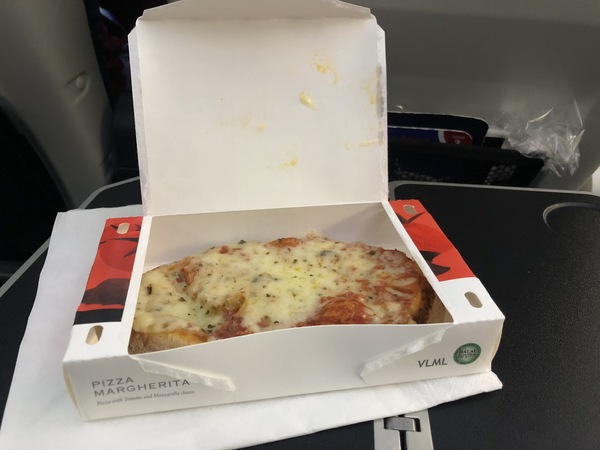 …. which is similar, if not the same, as what is served as the second meal in economy.

British Airways has improved its premium economy offering a lot in recent years. New blankets, pillows and amenity kits lend it a stylish flair whilst the cabin now has a dedicated menu served with real cutlery and tableware.

It is, by and large, a very competitive offering (although I have yet to try Virgin Atlantic’s Premium) and worth a modest price premium over World Traveller.

As this is HfP, I should also remind you that World Traveller Plus is a very generous source of Avios and British Airways Executive Club tier points.

Thank you to the BA team for arranging my flight.  You can learn more about World Traveller Plus on ba.com here.