This article is my review of flying the First Class Suite on an Etihad Boeing 777.  Whilst I came down on the one and only Etihad A380, my return flight was in First Class on the more common 777: 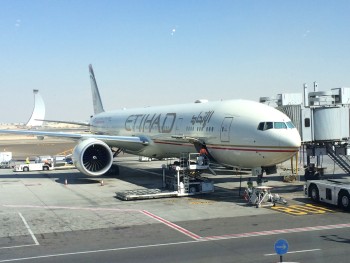 I wrote this article about how I booked my ticket using American Express Membership Rewards points.  This flight was roughly 55,000 Etihad Guest miles and just £14 of tax – and that included a chauffeur car at both ends. 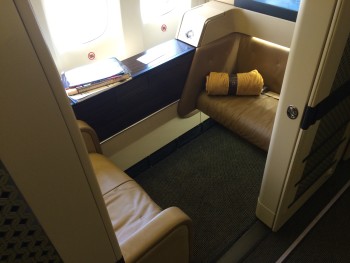 What this means, basically, is that your seat has a door – albeit a door that is about four feet high, so anyone walking past can see over it.  It has no real practical purpose as far as I’m concerned, and I never close them.  Here are some shots of the seat. 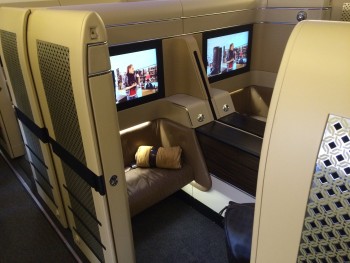 I was in 2A by the window (it is a 1-2-1 layout) but I also took some shots of the middle pair.  In terms of personal space, it is not substantially bigger than the Business Class Studio on the A380.  That is not to take anything away for the First Class seat here – it is more a sign of what a fantastic product Etihad is now running in business class on the A380. 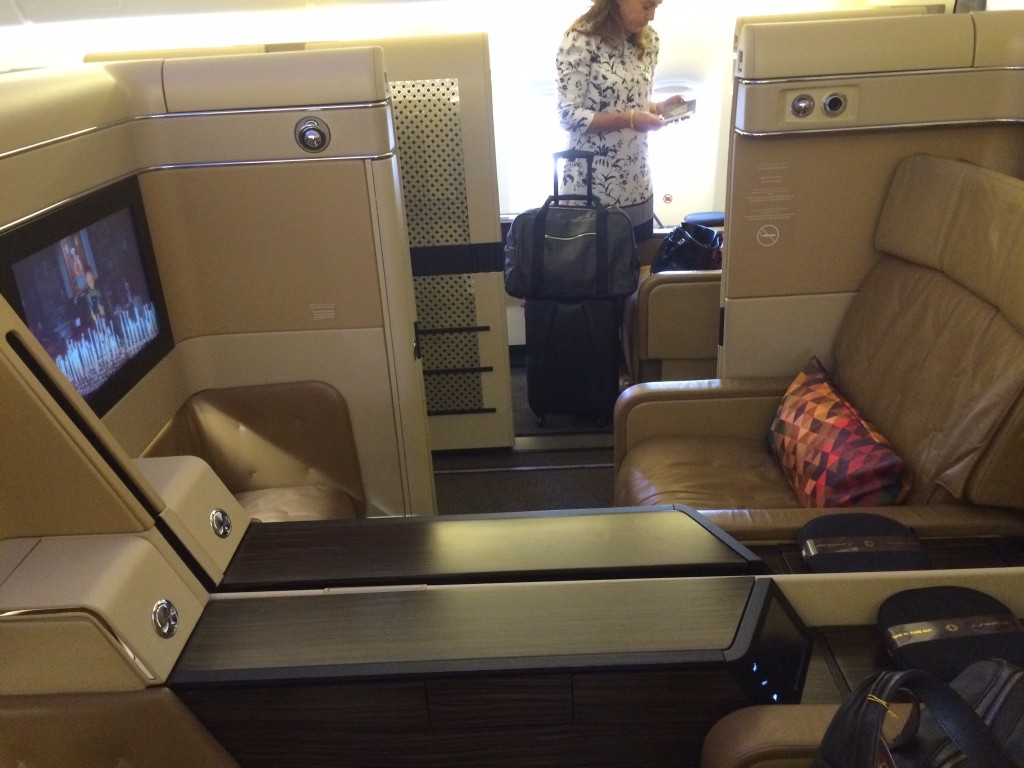 There is a cupboard inside the seat for handing jackets.  There are NO overhead lockers, oddly, and I was told to put my hand baggage under the ‘buddy seat’ under the TV – it only just fitted and it was only a small bag with two days of clothing.  The seat was wide, comfy and easily controlled using a touch screen. 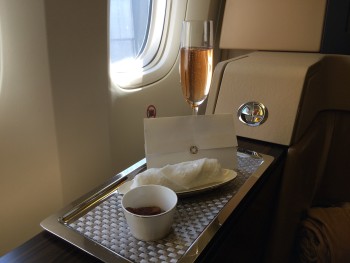 Even though it was a day flight, pyjamas were provided.  I covered the IFE and internet in my review of the outbound flight.  There is no on-board bar on the Boeing 777’s, sadly. 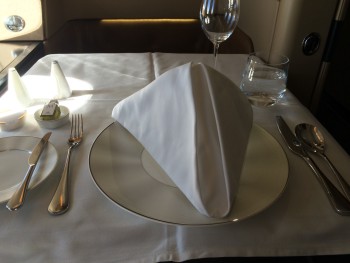 I want to focus on the food because it gives you an idea of what Etihad is trying to achieve.  It starts with a welcome tray containing a letter from the cabin service manager, a hot towel, some dates (which I didn’t take) and champagne (which I did), as you can see two photos up.

I recommend you look beyond the food and look at the crockery, cutlery and place settings.  Etihad made a substantial investment in this area in 2014 and it has really paid off.

The quality of the champagne was better than Business Class but nothing to get excited about.  There was a 2004 Gosset (£70 RRP) and a £35 rose from Jacquart.  The wine list featured bottles selling for a modest £15-£20 per bottle based on the sample I checked. 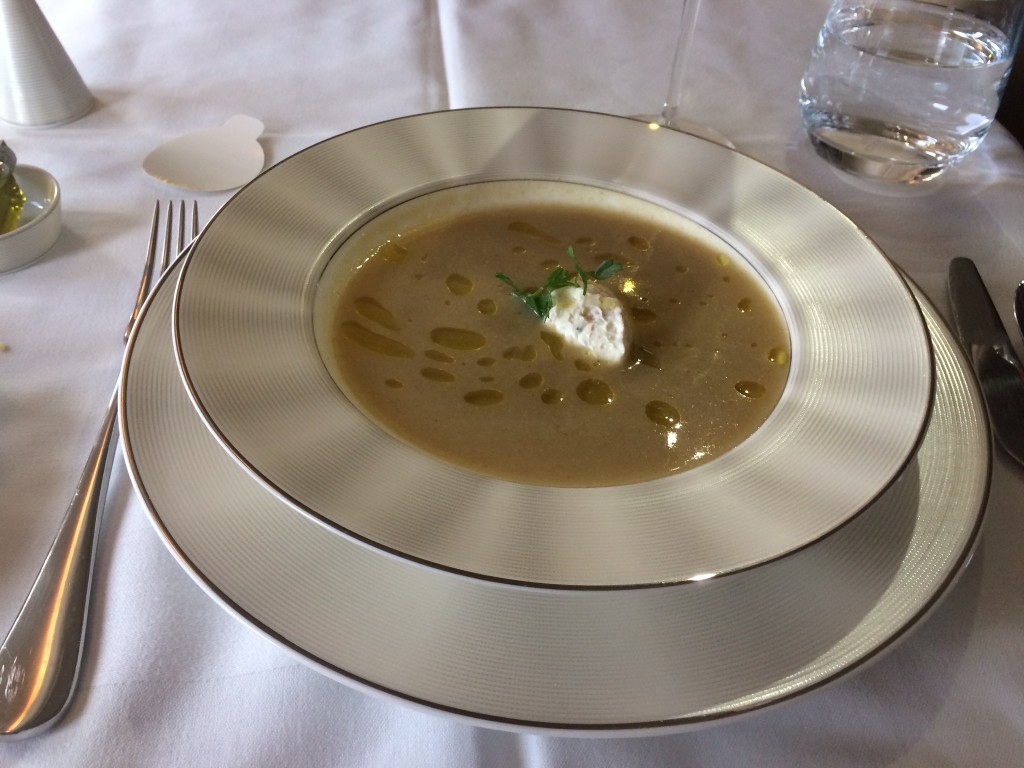 The food started well with an unannounced duck and vegetable rice roll (above).  We then hit trouble.  Of the four slightly odd appetisers – potato and cauliflower soup, celery and stilton soup, marinated prawns and mezze – the only one I fancied, the prawns, was ‘out’.  Not incredibly impressive.  I went for the potato and cauliflower soup as a fall back and, to be honest, it wasn’t bad. 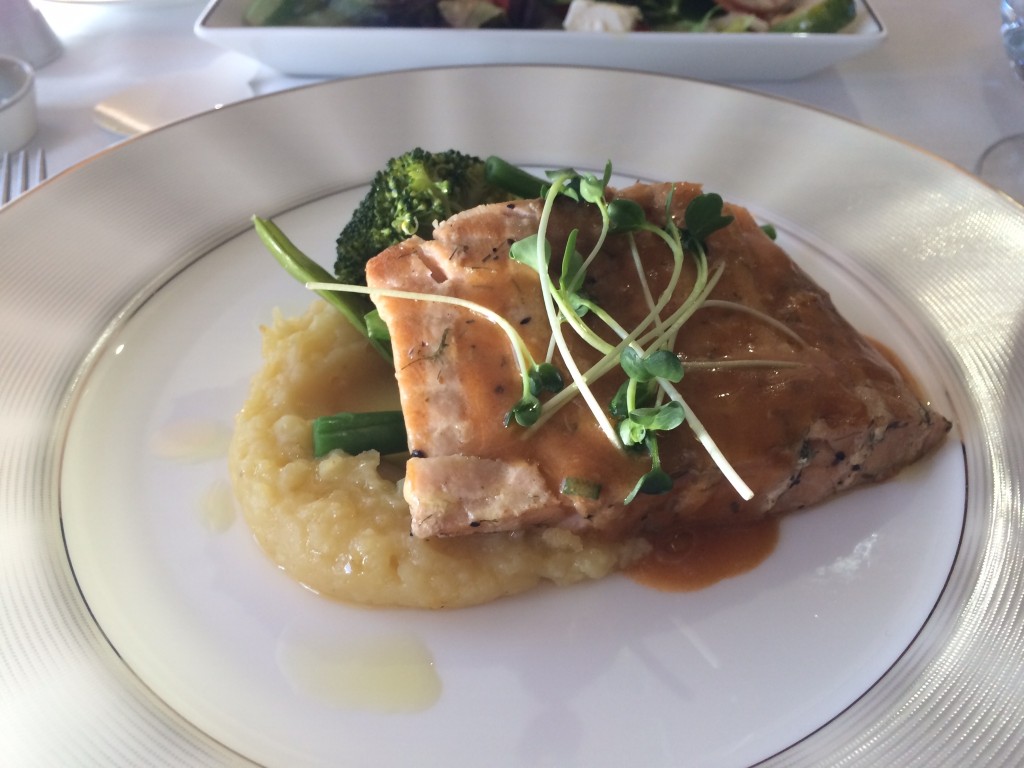 The headline main courses also looked odd on paper – a lamb, chicken or fish biryani, a trio of lamb or baked garden vegetables with mozzarella.  However, the plane has a dedicated on-board chef who came to my seat and asked what I wanted.  Not being overexcited by any of the three options above, we created something together from a long list of grill items.  I ended up with salmon on creamy mashed potato – and it worked well.

After my main course there was a ‘surprise’ extra chocolate dessert: 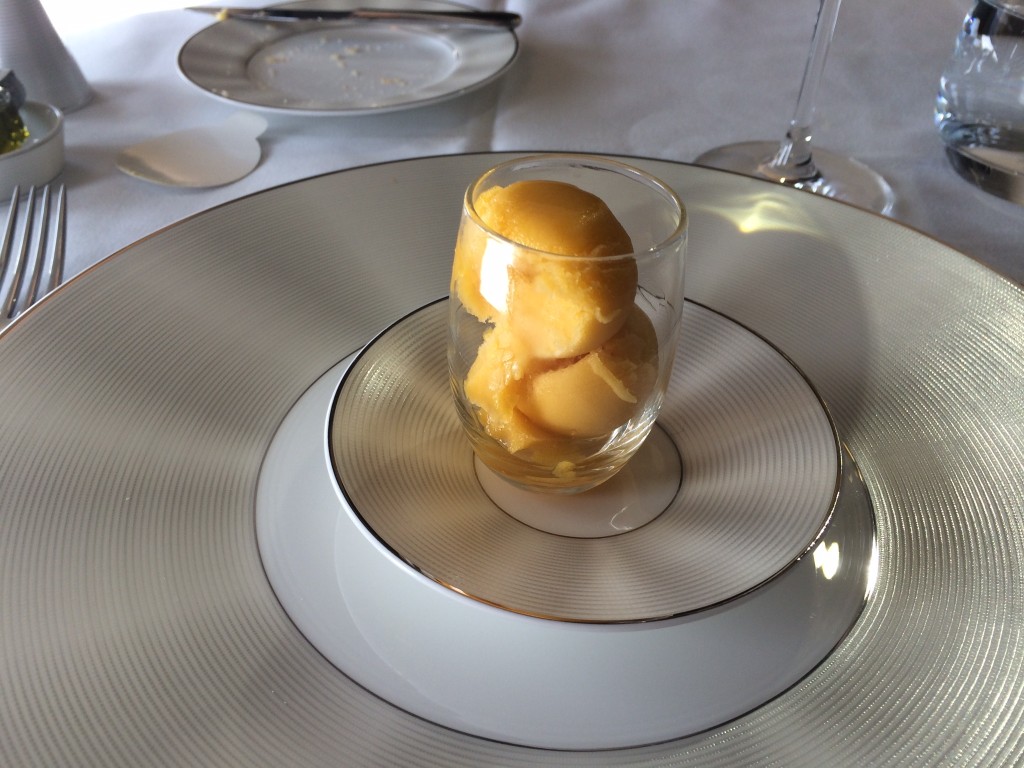 Followed by what I actually ordered, which was the warm rhubarb tart: 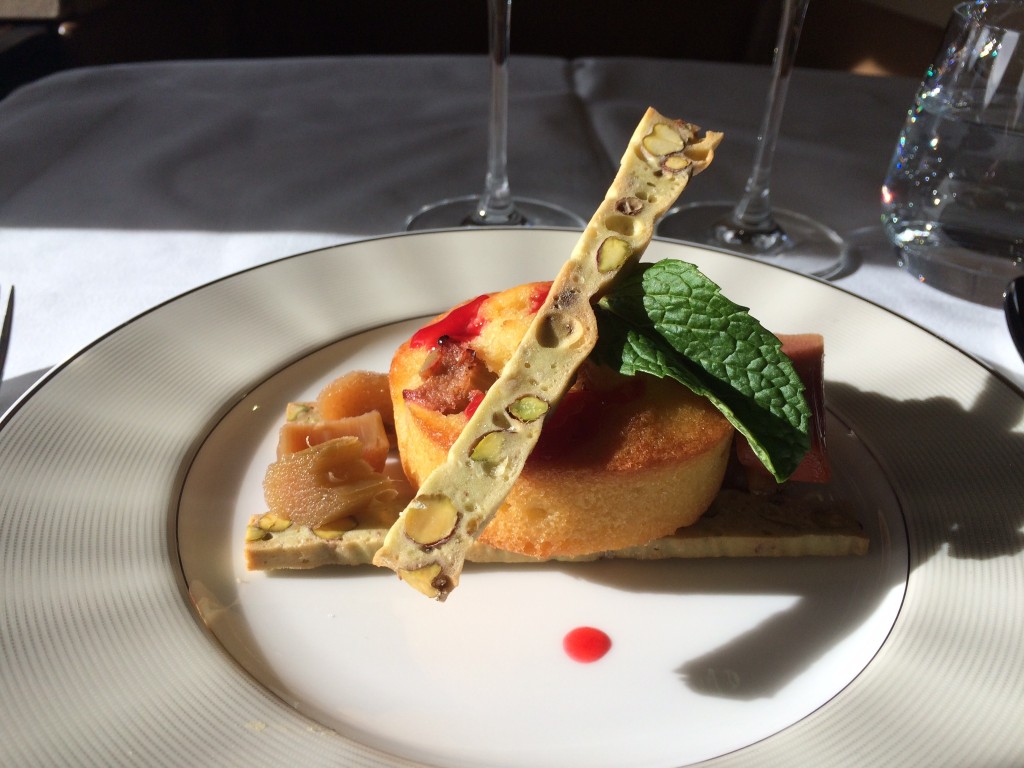 If you look back at my reviews of the first class food served by Lufthansa and Swiss, the Etihad offering is not in the same league.  Looked at objectively, though, everything I had was tasty and well prepared – it was just lacking the ‘wow’ factor that a bottle of Dom Perignon or a sprinkling of caviar brings to the proceedings.

Comparing First Class on a 777 to the new Business Class Studio on the A380 is difficult.  The A380 has a totally different First Class product (the ‘Apartment’) which is well ahead of the Boeing 777 First Class Suite in terms of space.

My 777 First Class seat cost 25% more miles than my A380 Business Class Studio and I think that is fair.  As 2015 moves on, Etihad is aiming to run an ‘all A380’ service from Heathrow which will mean that you are unlikely to have to make this decision.  If you can see an A380 First Class Apartment available for redemption then you should, without a doubt, take that.

Overall, I was impressed by what Etihad has achieved.  Like Qatar, they are now running a very mixed fleet of A380, B777, B787 and older Airbus aircraft (Qatar has new A350 aircraft as well!).

Of the Middle East ‘big three’, I would say that (on the A380) Etihad has the edge in terms of seating and ambiance, especially with the amazing bar.  Qatar has the best food and easily classiest lounge at Heathrow.  Emirates offers consistency – with so many A380 aircraft in the air, you are highly likely to get what you book and the overall mix of lounges, food and seating is good.  As long as pick – and don’t get swapped out of – the right aircraft, any of the ‘big three’ will serve you well.

I am now keen to try Turkish Airlines and see how their plans to make it the ‘big four’ are coming along.  I will have to see what I can arrange as 2015 moves on.