You may remember, late last year, the exceptional Qantas centenary sale, with 100 Golden Tickets from London to Sydney return for £205.

It was an offer too good to miss.  I had honed my speed-clicking technique in 2018, when I managed to grab one of Air New Zealand’s Golden Tickets to Los Angeles.  There are – as any Glastonbury hopeful will tell you – certain tricks to the trade when it comes these particular sales and I was hopeful my luck would repeat itself.

Fortunately, it did. It was a tense and adrenaline-filled few minutes as I clicked through the available dates and selected the special fare before rushing through passenger information and payment details as quickly as possible to secure my spot. Victory was mine! 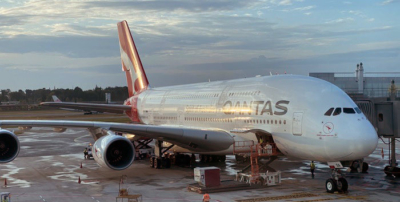 It was only after the initial dopamine rush that I realised the true extent of my actions.

I have – as you might have noticed – become accustomed to travelling in certain luxury whilst working for Head for Points. I’ve reviewed the Business Suite (formerly First Class) on Malaysia Airlines, the new Club Suite on BA’s A350s and the new Upper Class Suite from Virgin Atlantic.  I’ve even travelled on a private jet and enjoyed my own private lounge.

These things all come with a human cost – in addition to the financial one, of course!  I have become spoilt.  The mere sight of an economy class seat makes me shudder. How could I go back to that when I’ve been drinking champagne and enjoying a restful eight hours of shut eye on my recent flights? And yet, here I was with tickets to the furthest place I could conceivably go.

24 hours in economy – a punishment I wouldn’t wish upon my worst enemy!  There was only one thing to it: I had to create a battle plan.

If you google ‘how to survive long haul economy flights’ you will drown in a deluge of click-baity articles telling you to drink more water, moisturise and take some sleeping pills. I was certain I could do better, however. I wanted to take it to the maximum. I wanted to step off that plane into the glorious Sydney morning sun and feel as refreshed as if I had just spent the last 24 hours in First.

The QF2 flight from London to Sydney is made up of two legs:

My flight would depart London at 20:35, or 07:35 in Sydney time. I would arrive in Sydney two days ahead, at 06:10 on Sunday morning, with a whole day’s activities before I could sleep in a proper bed.

With my BA Silver status I would be able to use the Heathrow and Singapore lounges, which would help me freshen up.

Did somebody mention sleep?

With a combined 19 hours in the air I had enough time to (ideally) get some actual sleep. The first step to ensuring that was to get a decent seat: ideally an entire row to myself, so that I could flip the arm-rests up and at least lie fairly horizontal.

Luckily, on the Qantas A380, there is one seat that almost guarantees this: seat 36F. Whilst Qantas is currently refurbishing its A380s completely, the legacy aircraft have a very small 5 row economy cabin at the back of the top deck (click to enlarge): 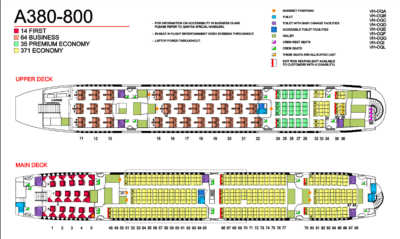 These seats are usually reserved for status holders – there are multiple exit rows and bulkeads that offer extra legroom. I didn’t care about extra legroom, however. What I wanted was seat 36F – the right hand aisle seat in the very last row. And I could have it – as a British Airways Silver status holder, I could select my seat at the time of booking.

As you can see from the official Qantas seat map, 36 D, E and F are the last to be allocated. You can see here on expertflyer that 36 D and E are blocked (marked by the X): 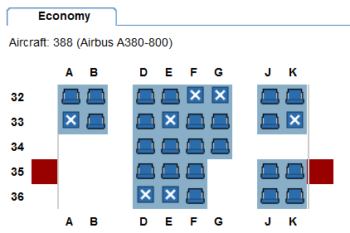 That’s because seat 36D does not have aisle access – it is blocked by a toilet wall. That means it is a terrible, terrible seat that would force you to clamber over two other people to get out – horrific! My strategy was to go against the flow, however. By selecting 36F I could virtually guarantee that the two seats next to me would be empty. After all, they are blocked on the seat map and would only be allocated if the aircraft is absolutely chock-full.

Next, I would have to come up with a sleep schedule.  Since I was trying to get as close to Sydney time as I could, I decided that my best bet was to stay awake for about 8 hours on my flight to Singapore before trying to get 4 hours of sleep. This would take me to 4am UK time or 3pm Sydney time. I would then be able to shower and eat in the Qantas business class lounge in Singapore thanks to my BA status before returning to the plane and trying to sleep as much as possible on my flight from Singapore to Sydney, which coincided with the Australian night.

If you’re flying in premium cabins you usually get an amenity kit. Most airlines don’t provide the same to economy passengers and if they do, you’re lucky to get a pen and some toothpaste. Qantas does, which is nice, but I needed to be better prepared to minimise the jetlag. Here’s what I took: 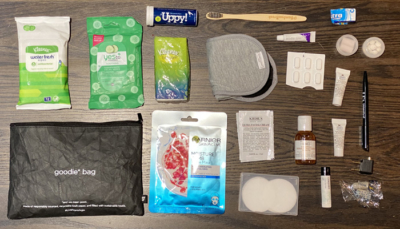 That’s not all. Since I was going all-out I decided I should also take some skin care products to try and keep the moisture in my skin. I went to Kiehls and asked them for some samples and what they would suggest for an inflight skin-care routine, and they kindly complied, supplying me with a three samples:

I just about managed to squeeze it into the Virgin bag, minus the Uppy rehydration tablets. 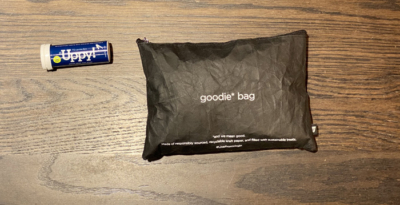 As every traveller knows (especially rowdy stag and hen doers…) the trip starts at the airport.

Unlike at some airports, where you are dumped in a worn out and neglected lounge, Heathrow Terminal 3 has an unparalleled selection of genuinely exceptional lounges, with BA’s own Galleries lounge, the American Airlines Admirals Club, Cathay Pacific and Qantas lounges all accessible with my Executive Club Silver status.

With so much choice, I had to come up with a lounge strategy to make the most of the three or four hours I wanted spend in the airport before my flight. 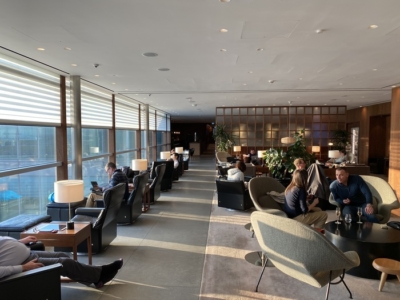 There are multiple zones and it was very quiet during my stay – I would hazard unusually quiet given the frequency reductions Cathay Pacific has implemented due to coronavirus. Here is the bar: 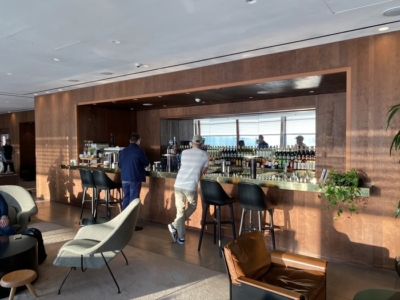 Both the Qantas and Cathay Pacific lounges offer shower suites for guests, and having come straight from work I wanted to freshen up a little before my flight. The Cathay Pacific showers are beautifully done, clad in a dark stone with brass features: 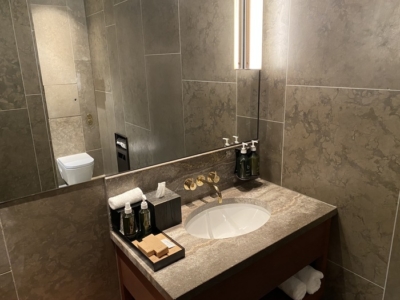 They are stocked with Bamford toiletries and a range of amenities including a dental kit, shower cap, comb, razor etc. Here is the shower, which features a rainfall showerhead: 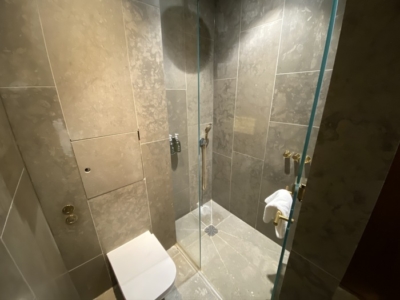 They are, quite possibly, some of the nicest showers I have ever used. (The toilets in the lounge have the same design and are probably the classiest toilets in Heathrow!) I followed it up with a couple cocktails in the lounge: 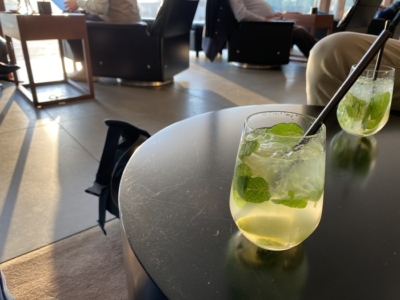 ….  which I enjoyed whilst admiring the beautiful sunset from the floor-to-ceiling windows. The entire lounge was bathed in a beautiful light: 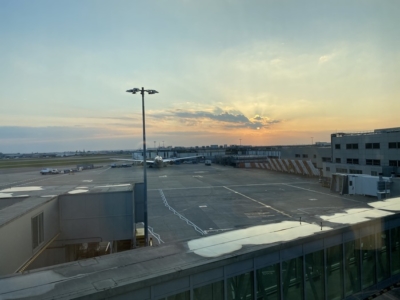